NaSTA 2016 was held in Leed by LSTV. YSTV took along a mere 6 members, plus two alumni who were in the area. 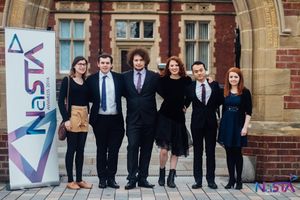 YSTV won Best Documentary for the fourth and final episode of Lights on Literature:

Bombastic opening with some amazing camerawork - time lapses / pans of the coast / shots onboard the boat. Excellent choice of music throughout brought Bram Stokers creation to life. The context behind gothic literature was intelligently conveyed. The script flowed beautifully to match that. There was an absolutely stunning ptc halfway through. The skyline looked fake! It was that good. Clearly some luck with the weather. The way the piece was packaged - in terms of editing and shot choice to illustrate the script was superb. And importantly the level of passion was balanced really well. The enthusiasm was kept in check, it never spelled overboard. An engaging reporter who brought fun and yet thoughtfulness to the piece. The ending was great. Tiny forgivable audio hiccups on the boat. On occasion the music was very loud - perhaps deliberately so because it made me look over my shoulder as if Dracula was behind me.

A wild Sam Willcocks appeared in time for Spoons on sunday, because he'd just got back to York and was bored. Also Lloyd Wallis, and some others who escape my memoryUnverified or incomplete information.