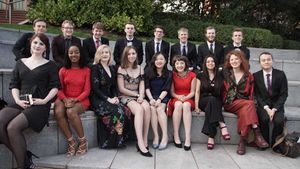 YSTV before the award ceremony

NaSTA 2018 took place in Sheffield, at the weekend right before the beginning of York's summer term. YSTV brought along 17 members, who witnessed the station being shortlisted for several awards as well as winning two Highly Commended: one for Tom Lee as Best Technical Achievement and one for Katherine Bell and Kenric Yuen for the 50th Anniversary.

All entries were coordinated by Head of Presentation Iona McEwan. The footage filmed by YSTV members over the course of the weekend was edited into an episode of Behind The Streams by Sam Hance in the style of an investigative documentary.