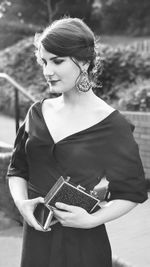 Anastasia joined YSTV as a fresher in 2017, becoming the station's first Head of Scripted. She is known for being all about aesthetic and always being dressed impeccably. Her most notable contributions to YSTV include producing and editing the successful Guide to the Colleges and acting as Director of Photography for Hidden and Robbing Chloe. She also crewed on several livestreams and travelled to Sheffield for NaSTA 2018. Due to her committment to her course, she left her position to Jacob Boyle but returned occasionally to YSTV.

Her trademark is her black hat, which she wears regardless of weather. Ironically, she does not wear it in this picture, but trust me: She wears it a lot.