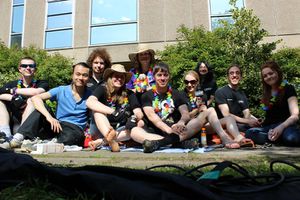 Some of the Crew enjoying their Pre-Show Picnic

Live on the Lawn took place on Saturday 17th May 2014 (Summer Wk4) running for 1 hour 17 minutes. It was produced and directed by Grace Winpenny, and the assistant producers were Ellen Dunbavin and David Heaton. Matt Judge and Chris Wall presented the show.

Live on the Lawn (LotL) 2014 aimed for even more live content than in 2013 but kept much of the same structure. The set was 'just off the lawn' outside YSTV which meant that technical difficulties were easier to solve than if the show had been a 'real OB'. The main focus was live music acts but the show also included interviews with Kieron Moore about Union Episode 3 (which made its debut after LotL), and a Skype Interview with Emma Bew which was ever so slightly hi-jacked by two of the Union cast...

Rigging began around 12pm, and was supervised by the Tech team, but most of the actual rigging was completed by members who had attended OB Training. By the Technical Director's words of approval, it is safe to say that OB Training was effective and very useful for members with less rigging experience.

Additional Guests on the Show

From the beginning of time, the production team wanted to minimise the number and length of VTs in LotL, because they felt the emphasis should be on live content. This is because LotL is a warm-up show for Woodstock, YSTV's longest Live OB.

Taking inspiration from the NaSTA award-winning Lights on Literature, the producers decided to create a stop-motion animation title sequence. This was filmed on the Wednesday before the show with Helen Hobin and Grace Winpenny moving props around whilst Tom Cheyney made miracles happen on his camera. Grace then edited the title sequence on the Thursday and the files were ready for Saturday afternoon.

Filming took place on Vanbrugh Bowl (much to the confusion of Music Students and the waterfowl inhabitants of the grass) and props were kindly lent by several YSTV members, the Props Drawer and from Dramasoc. Whilst the weather was mainly sunny, occasionally the Sun decided to hide, so there are some lighting inconsistencies. Whilst editing, it was decided that Colour Correction was too much fuss and that the differences in lighting added to the quirkiness of the title sequence. The music used in the titles, stings and credits is public domain.

Short sections of the title sequence VT were used as stings for the other VT's.

Not made for LotL but used as Episode 3 was shown straight after the show. Gave viewers chance to get to know what Union is and what to expect from this unique episode.

When procrastination takes hold, editing happens, and VTs are made. The producers had a vague outline of the show in the weeks before LotL, and knew they wanted to talk about last year's Woodstock, so a 58 second VT was made to prompt interviews, and, once again, to bring viewers up to speed, particularly if they had not been to a Woodstock