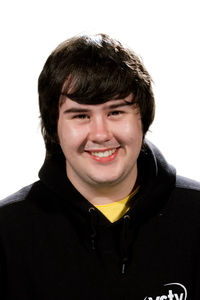 Chris joined the University of York in 2011 as a Film and Television Production Student. Chris joined YSTV after attending the freshers meeting and discovering how friendly and passionate people were about producing great TV.

In the Spring Term of 2012 Chris began producing Pushing The Senses YSTV's first 'magic' show since Magic Hands. During this term Chris also worked on the 2012 Best Broadcaster showreel along with Sarah Pickles, Steven Perring, and Michael Miller (note the use of an oxford comma). YSTV ultimately went on to win Best Broadcaster that year whilst Chris' own show, Pushing The Senses, went on to claim the prize for Highly Commended in the Light Entertainment category.

In the Summer term of 2012, May the 16th, Chris was elected Station Director of YSTV. During this time he was probably most famous for the Cute Animal feature of the 'Everyone E-Mail'.