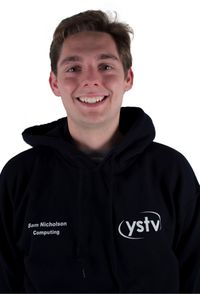 Sam came across YSTV and URY at Fresher's Fair 2010 and decided YSTV looked more fun, and hasn't looked back since. He was the Deputy Computing Officer from 2010 through to 2011, then made the step up to Computing Officer for the 2011-12 year. Commonly asked whether he was really a fresher in his first year, he spent much of the latter half of his first year and most of his second in YSTV, somewhat to the detriment of his Electronics degree.

Disappeared off (whilst back to being the Deputy Computing Officer) to do an Industrial Placement for the 2012-2013 academic year and returned for 2013-14, as an ordinary member for the first time in a while. Ordinary membership became boring around the Autumn 2013 by-elections, where Sam returned to the Deputy Computing Officer job following the departure of Greg Ebdon. At the 2014 elections he decided to leave the Computing team to fresh new talent, and replaced Matt Johnson in the role of Deputy Station Director.

Finally became Technical Director for a brief stint between the 2015 elections and the end of that academic year, before finally graduating and going to work for BBC R&D in London. Also lived in 84 Thief Lane for the 2013-14 and 2014-15 academic years, and was the last one out at the end, having taken the longest time to pack up on account of having a car and doing all the tip runs.