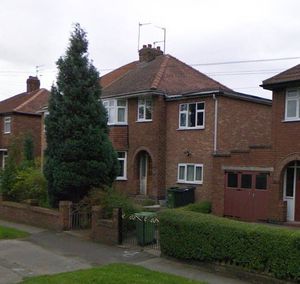 84 Thief Lane before the loss of the identifying tree.

In the Summer of 2010, 84 Thief Lane (often abbreviated 84TL) joined the list of significant YSTV Residences. During the 2010-11 academic year, six of its seven inhabitants were members of YSTV, and at its peak it housed the holders of four officer positions - a quarter of the entire officership at the time. Many socials were held or began there (largely due to it being the Social Sec's home, handy location, its useful living room and the fact there were no non-YSTV people to get annoyed/be scary) including the Oscars socials and several birthdays.

For 2011-12, the only non-YSTV housemate was replaced by another member, making a full seven YSTV member house. During this year, frequent visits were also made by one time Deputy Technical Director Alena Denisova (Tim's other half), as well as Station Director Sarah Pickles and Head of Presentation Steven Perring, who lived in nearby Norman Street.

Being a fairly close-knit society, it was no surprise that for 2012-13 three outgoing housemates were replaced by more YSTV members in the form of Alena Denisova, Elizabeth Pascoe and Anmoli Sodha. The visits were the turn of Alex Williams, Greg's other half, and occasionally YUSU Welfare sabb legend Bob Hughes who lived a couple of doors down the street. Everyone loves Bob. Moreover, from late 2012 until the May 2013 elections four of the six team leaders were residents (Deputy Station Director Matt, Commercial Director Marie, Technical Director Liz and Computing Officer Greg).

A new era began in 2013-14, with only recently elected Station Director Liz and re-elected Deputy Station Director Matt remaining. Graduations and drop-outs had taken a serious toll on the YSTV population of the house. Although, the arrival of Sam Nicholson from his placement year was met with much rejoicing.

2014-15 began with the addition of Liz Williams and frequent visits from recently graduated Alex Buckley, but this year was to be the last. All but New Liz were graduating, who already had plans for the next year.

And thus it was a new age of 84 Thief Lane began. And the Fellowship of the housemates, though eternally bound by friendship and love, was ended. Yeah, that's right. I paraphrased Lord of the Rings. Bite me.

Members of the house bonding.