This article is about a piece of equipment. For more information on what it is for or how to use it, try its documents wiki article.

Some people say that Studio Comms are the last thing to be set up and the first thing to go wrong when a YSTV programme is made. This article primarily covers the comms system conceived for Breaker 88, and still in regular use in YSTV's studios in 2007. It was later replaced with Wedge. 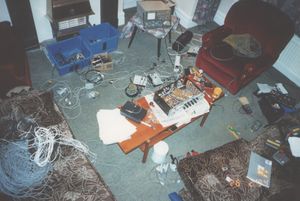 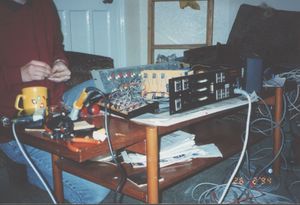 John Stubley trying to fix one connection before another one breaks

Prior to Election Night 1994 it was recognised that the Studio Comms system needed a look at to see if any of the idiosyncracies could be ironed out from the system. John Stubley volunteered for this role and was assisted by Owain Davies. Normally the system would have been in full time use, however since YSTV at the time was a station without studio, it enabled the system to have a good going over.

The system came out of storage somewhere on campus and went round to Owain's place of residence at the time, 8 Siward Street. For two weekends, John and Owain worked tirelessly on the system in the front room. Their impression was that some thought must have gone into the design of the system, however the realisation gave the appearance that it had all been thrown together at the very last minute. The design of the system seemed to consist of

The system was primarily constructed on veroboard, which was either mounted on pillars on the side of the rackmount box or, as in the case of three boards containing the analogue switches, held by gaffa tape in the centre of the box.

Owain and John did transcribe some of the circuitry on to paper, which led to the explanation for why the control room ring circuit never worked. At some point in the earlier life of the system, an electrolytic smoothing capacitor had been placed erroneoulsy between ground and the audio channel for the control room ring circuit on one of the analogue switch boards. This was removed from audio channel and placed on the relevant supply rail, as it was on the other two boards. Their remaining time was spent sorting out an accummulation of minor faults in all the other ancillary equipment that went with the system.

Some time in 1995 or 1996Unverified or incomplete information, Owain adapted the system to give a line level output (loose description) from one of the control boxes to feed into the SVHS machine on one of the audio channels. Channel separation was pretty good on the stereo track of the SVHS. This was done on-the-quiet for Election Night, where the SVHS machine had the honour of recording the proceedings. After the programme, there was a complaint about some comments being made over the comms systems about one of the guests. The tape was reviewed, and as it happened, the control box that was tapped turned out to be the producer's as opposed to the directer, so the issue could not be resolved categorically (I believe the line at the time, was that there was nothing on the tape). Never the less, it did provide an interesting retrospective into the mechanics of the program.

As it approaches its 20th birthday it's not clear when a brave soul will step forward with a design for a new wireless digital comms system.

Dominic Plunkett designed a system involving a single XLR cable connecting all the comms boxes sometime between 1992-1993. This formed part of a first year group project for his and others degree and won the prize. The design and development were quite advanced, but it is not known if it was trialed on any YSTV productions.

Malcolm Chambers made an effort over Summer 2009 to design a replacement capable of running over CAT5 (actually, it's designed with OB comms and studio comms in mind). This is desperately needed as both current systems are getting way to old for reliable electronics.

Yet another possible Replacement

Michael Chislett was (2010/2011 winter) working on another idea - As Malcolm's never actually got finished (some things worked...). It is based upon the "party line" principle, yet because of some clever Powering, is able to carry three signal states, instead of the two offered by the standard canford/tecpro system used in most theatres. The three states, power, and audio all fit down a standard 3 pin XLR.

Moving on to balanced ideas

Given the noise issues with the current systems, another ideas was floated, balanced party-line comms running over XLR, designed to be sufficiently compatible with microphones that they won't go pop if plugged in to the sound desk. As of summer 2013 the system entered active service in the studio and on most OBs, see Wedge on the docswiki for more.