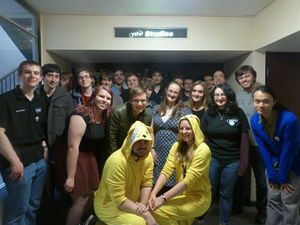 The live show took place on Saturday 16th November, running for 2 hours. It was produced by Helen Hobin, directed by Sam Nicholson, and presented by Grace Winpenny and Matt Judge. Involving a range of live music acts, presenter challenges and VTs, the show - combined with Chris Wall and Helen Hobin's pledge to wear Pudsey onesies for 7 days straight - raised £608.

The first act was Stewart Crank, on vocals and guitar, who played a range of songs including 'With a Little Help From My Friends' by the Beatles. Next was Thea Maxwell, playing her own songs, also on vocals and guitar. Finally, BNOC and YUSU President Kallum Taylor and guitarist Robert Grout played a medley of songs which they'd composed earlier that day, all inspired by popular York club, 'The Willow', and including the memorable refrain: 'I'm a mother-loving B-N-O-C!'.

The primary presenter challenge, 'The Great Bear Bake Off', was prerecorded and used as a VT. Two other challenges took place during the live show. The first involved Matt and Grace being given two sets of face-paint, kindly lent by Liz Williams, and instructed to paint each other's faces as animals, whilst guessing from the colours and techniques used by the other person what they were being painted as. However, this was made slightly difficult by the fact that both presenters wore glasses, which had to be taken off for the painting - and therefore when the challenge ended they were slightly surprised by the effects which they had created - to put it bluntly, they looked like an ill dog and a tired orange. The second challenge began when they were given two giant Pudsey gingerbread cookies and a packet of coloured icing tubes. They were told to turn over the cookies and using the icing tubes draw another famous animal icon. Grace created a frowning Rudolph-esque bear whilst Matt somewhat ingeniously used the opportunity to make a portrait of Chris Wall, within his Pudsey onesie, of course. Chris was the judge for this challenge, and declared that Matt had won. 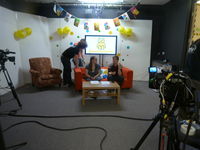 Chris Wall performed a magic act, using his mind-reading abilities and card skills to bamboozle the presenters, before being interviewed about his magic. Helen and Chris also appeared earlier in the show, to discuss Children in Need and the experience of living encased within a onesie. This led Chris to tell an alarming story involving vodka and a little girl in a queue. 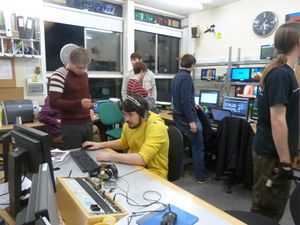 The Control Room gets ready

in Costcutter, dancing atop Central Hall and playing a terrible game of tennis - beautifully filmed by Tim Copeland. 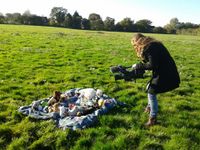 This section is intended to help future producers of Children in Need by giving a run-down of what went well and what went slightly less well. 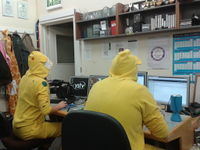 The BBC wrote a paragraph about our efforts on their Children in Need BBC Blog: "That's a crazy amount of stuff going on for a good cause, we’re sure you’ll agree - and there's more! The awesome students at York Student Television (YSTV), York University’s very own campus TV channel, put together a great BBC Children in Need-themed broadcast featuring all the characteristics of the charity’s annual Appeal show and giving them a distinct York University twist. Two students, Grace and Matt, presented the show which featured live music, onesie mayhem, broken eggs and funny sketches! You can check out the show here, and of course, a huge thank you to all at YSTV for going to such a huge effort to raise money!"

Helen Hobin gave a video interview for the York Press, filmed by Christopher Parker, and student newspaper Nouse came along to the BNOC Flashmob to take photographs and tweet about the event. 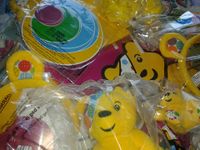 Merchandise for the show