The Golden Bodge is, to many at YSTV, the best part about the NaSTA weekend. Screw the awards. Screw the networking. Keep the alcohol - you'll need your creative juices.

Rules vary a little year-to-year, but the essence of the Golden Bodge is simple.

Brief: "A coming of age comedy with the line 'I can't do it while you're watching!'"

Hyped by the previous years' success, Emily Torricelli and Grace Winpenny came with a pre-written song for this year's bodge - "One Bodge More", which was based on "One Day More" from Les Miserables. Lloyd Wallis returned this year as a Kinda-PaSTA, but was initially skeptical about pulling the same stunt as 2014 without having something new and cool and different or somesuch.

Some drinks followed, and a discussion between most of the station's attendees, including Thomas Cheyney and Liz Pascoe went on for some time - the plan to play Cards Against YSTV lay forgotten. But it was Sam Nicholson that proposed the idea that got people interested. We could use Social Media. We would follow the rules. We would still do the song. We would still be awesome.

Initially, Snapchat was proposed - each role would Snapchat their line to the others, and then the next would, and so on. However, this had a time limit for each line, and severely limited the number of takes available. Vine had similar issues. Eventually, we concluded the best bet was YouTube videos embedded on Twitter timelines - you can see the result on [Lloyd's Timeline https://twitter.com/LloydW93/lists/one-bodge-more]. We could then technically shoot out of order - the video that was submitted was a single-shot, single-take piece of content. We did end up staying almost in order though, which was nice.

Outtakes exist, most notably of Peter Eskdale missing a shot and loudly shouting "FUUUUCK". Also of note is that Thomas Cheyney was not intended to have original lines - Lloyd Wallis's production skills were just so good that he skipped straight over those lines entirely from the script and didn't realise until the end. However, it did give Tom an excuse to get changed into his suit very quickly. Chris Wall was unavailable for the second part of the shoot, so an Asian substitute was found.

Brief: "A bodge about the World Cup in a '50s Americana' style with the line 'You're only supposed to blow the bloody doors off!'"

Whilst slightly drunk, Lloyd Wallis noted that, putting aside all of the other flaws with LSU's exec song, that there were far better choices for a parody out there. Due to the current box office offerings, the first example was "Let It Go". Lloyd vaguely drunkenly belted out half a chorus and as far as his memory is concerned woke up the next morning, with the largest concern being that he was not in his bed.

Overnight, Grace Winpenny and Emily Torricelli had scripted a full parody of the Frozen number, and Thomas Cheyney had started planning the choreography. The soundtrack of Grace and Ellen Dunbavin was recorded in a somewhat free room in the SU building that we claimed using the mics on Tom's laptop, with someone stationed outside to stop a nearby door slamming, before being very roughly chopped up by David Heaton (sadly causing him to miss the talk on audio).

With consensus for ignoring all rules established, props were located, and a set that looked oddly like Heslington East was spotted. Cast members were grabbed from the pool of people willing to sacrifice preparation time before the awards evening. Sadly, time ran out when shooting, so only the first part of the resulting video has content. The rest involves David turning a page forward and back on a notepad, claiming that you are listening to Loughborough's student radio station. We guessed the name. We were close. Someone had the bright idea to film an intro/ending on the morning of the deadline, which admittedly did give the bodge something resembling a plot, and the notepad filler was shot during a break on the journey to the AGM venue. With Tom Cheyney being Tom Cheyney, the video was edited remotely on Tom's home PC whilst waiting for the venue doors to open. 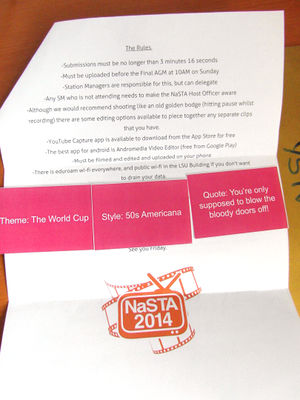