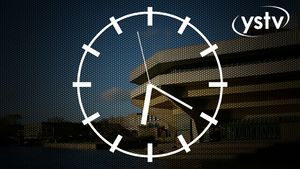 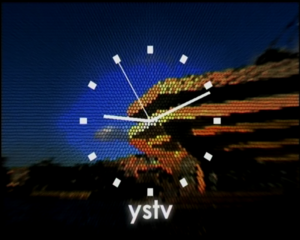 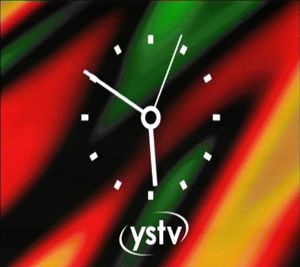 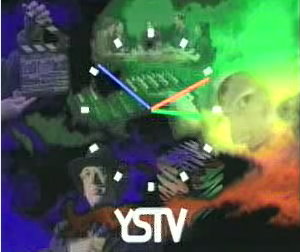 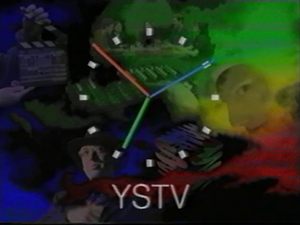 Closer to it's final look - but the YSTV logo is replaced with plain text, May 1999 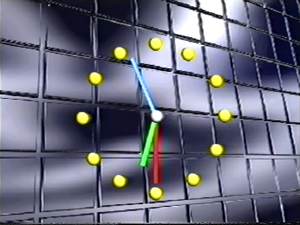 Clock as it originally appeared in Feb 1999

The YSTV clock was introduced in 1999 as a way of identifying the station before live programmes begin, and making it easier for the director to count down a production to its on air point. The software was written by Matt Hammond to run on an Acorn A3010 computer. Later modifications were made to the software to keep the machine in sync with the correct time. The software has been rewritten several times over the years.

YSTV has rarely used conventional short idents before live programmes - before the days of the clock, live programmes would usually be cut straight from Grapevine or a continuous spinning YSTV graphic (examples of which can be seen in the YSTV Gold ident).

The design changed several times in 1999, before settling on various elements such as the cube logo of the time and stills from Bona Dicta and Cooking With. The same design was used on the website at the time (finally dropped in early 2003), in publicity posters for 1999-2000, and in Nony nony nah.

This design of the clock lasted until Autumn 2000 when the YSTV logo was changed, resulting in a new clock face. This version has even appeared in a number of shows itself (as opposed to introducing them) including Solipsism (in some sort of in-joke or spoof), Small Screen (in a behind-the-scenes segment) and Good Morning Campus (as an on-screen time-piece).

On occasions when Grapevine is down for maintenance the clock has been used as the on-air sustainer. There was also brief glimpses of it when playing out programmes, originally to hide the Sky info bar when changing channels in the digibox. This useage has on occasions given rise to YSTV being named "clock soc", implying that it is all we ever show. It also had a reputation for a while for being inaccurate by a few minutes.

Now S4C, BBC One, C4 and all ITV regions have dropped their on-screen clocks (even on technical failures!), YSTV may be the only UK broadcaster left to use one.

At the start of the 2009/2010 academic year, the Clock was re-written by Michael Cullen with help from Nathan Lasseter to run on PC hardware, with anamorphic widescreen enabled. One thing to notice was that the hands only moved when their unit of time is up - ie. the seconds moved after the second, the minute hand moved after that minute, and the hour hand moved only once every hour - this lead on many occasions to watchless techies missing lectures! When YUSU lent YSTV their plasma screens around campus, they were known to complain of the clock's marks screenburning!

Clock was revived in 2013 by Sam Nicholson in HD as part the automated scheduling software Tarantula. It isn't seen much between programs, instead being shown overnight during closedown. Unlike its predecessor, the hands on this clock move continuously, meaning the minute and hour hands are always accurate. For the nostalgic types, Peter Eskdale has recreated the 2000-09 clock for Tarantula.

With the cessation of a full-time live stream in 2017, Clock has since been retired.