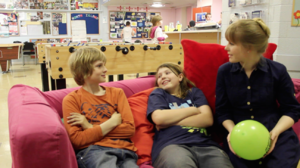 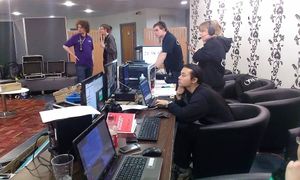 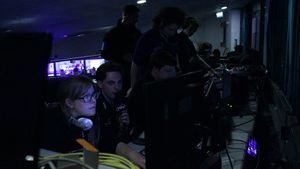 Sarah Mesterton-Gibbons became a member of YSTV in October of 2014, and was elected Outside Broadcast Coordinator in January of 2015, holding the position until September. She produced Children in Need 2014 along with Matthew Ingram, Amy Wilson, and Robyn Place (coming up with some beary bad puns in the process), and presented the two-hour live show with Robyn, ending up with a mouthful of fluffy marshmallows. She and Kenric Yuen co-produced Roses 2015 (a huge sporting tournament between York and Lancaster), for which Sarah produced five daytime studio shows. Sarah directed YUSU Elections Results Night coverage 2015 - the equivalent of jumping in at the deep end - and then decided to actually jump in the deep end for a swim across Whitby harbour mouth with Helen Hobin and Iona McEwen after filming Lights on Literature, so that Sam Nicholson would have to drive home. Sarah wants to be a children's television producer some day, and worked at a PBS member TV station in Florida before coming to York to complete her MA degree in Psycholinguistics. She also worked for the reality TV show Say Yes to the Dress: Atlanta, as an associate producer on location. Sarah really loves making telly, and has a love/dislike relationship with autocue. She has a really, really long and complicated last name (hence the abbreviation, M-G). Sarah does crafty things and reads in her spare time, and doesn't eat meat (aka, vegetarianism...everyone has an -ism these days). She has spent many a happy hour winding cables onto drums at 2am and filling out event management forms. Sarah was awarded "YSTV Mum" at the 2015 Floppy Awards. 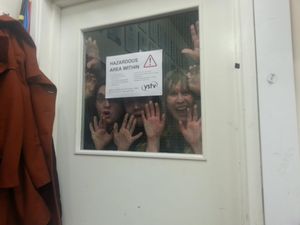 Pretending to be stuck in the studio hall because YSTV does not come without a good dose of silly
Retrieved from ‘https://wiki.ystv.co.uk/index.php?title=Sarah_Mesterton-Gibbons&oldid=9344’
Category: