Live on the Lawn

Live on the Lawn is YSTV's live outdoor music show, broadcast to get us out of the studio in beautiful sunshine without the load of a full OB, and often to test out equipment ahead of full OBs such as Woodstock. It is usually performed from the lawn outside our G/046 window, sometimes with links and interviews from within the studio. It affords us the unusual opportunity of having the floor/studio within sight and speaking distance of the gallery.

Some incarnations of Live on the Lawn have been more casual than others, including some unannounced stream tests. 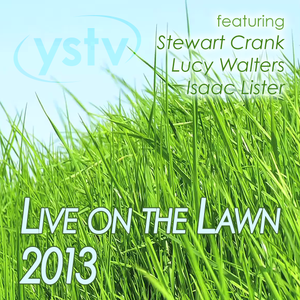 Live on the Lawn 2013 was produced by Emma Bew as a warm-up for Woodstock 2013. It featured Stewart Crank, Lucy Walters and Isaac Lister, presented by Chris Wall and Matt Judge.

It remains the only YSTV show to have its own album. The stereo mix was recorded to the Zoom R16 for use in the on-demand edit, then cut into an EP by Greg Ebdon, available from http://ystv.co.uk/static/downloads/YSTV_Live_on_the_Lawn_EP.zip.

Live on the Lawn took place on Saturday 17th May 2014 (Summer Wk4) running for 1 hour 17 minutes. It was produced and directed by Grace Winpenny, and the assistant producers were Ellen Dunbavin and David Heaton. Matt Judge and Chris Wall presented the show.