Difference between revisions of "STV VT"

The Single Transferable Vote VT is used during elections to explain to the viewers how the voting system works. It has become something of a tradition on election night. 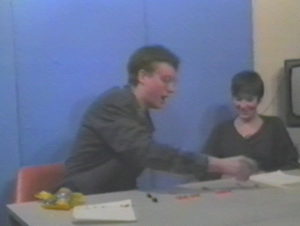 Thought to be the first attempting at explaining the YUSU voting system, this starred Chris Kwouk as Professor Humpy explaining the way votes were counted to Kate Gordon through the use of jelly babies. This was reused in for YUSU Elections 1996.

This was presented by Ben ??Unverified or incomplete information and was filmed in Derwent Dining Hall. It featured balloons to represent the candidates. Clips from The Simpsons were used to illustrate. It may have been reused for a number of years afterwards.

For Elections 2003 Michael re-filmed the above in YSTV's studio (the tape of the original had decayed somewhat, and Derwent Dining Hall had been re-decorated), complete with balloons and the same clips as before - this time cropped to eliminate the Sky One logo! This version was also used for 2004's programme.

Sweep won the election, as the votes transferred from Selbysaurus being eliminated jumped him ahead of Ed the Duck.

The VT was produced specifically without being dated, so it could be used time and time again.