Limited Edition was a light entertainment show produced for YSTV by Rowan de Pomerai and Sarah Cheyne in the year 2006/07. As of Ep.3 Mark Friend also produced.

In the years before LE came about, there had frequently been talk about a 'personality based' magazine show, as successfully done by stations like Stoic with their Matt and Dave Show and Foot and Mouth. The previous year, Sarah Leese and Kev Larkin had discussed the possibility of such a show but had not gone ahead for reasons including the production of The Sofa Show. The latter show was Ben Tattersall-Smith's attempt in this area of programming.

So it was that plans started forming for a show to be produced in 2006/07. This would be produced and presented by Rowan de Pomerai and Sarah Leese, and ideas started forming in pub discussions and the like. However the arrival on Charlie Selby scuppered these plans, meaning Sarah wouldn't be available. Rowan still wanted to produce a show, moving on from LipSync (which he was producing at the time), but wasn't sure what to do. Eventually the idea cropped up that Sarah Cheyne might be a suitable co-producer and co-host, and when Rowan approached her she liked the idea.

Ideas began forming during the 2006 Summer Expedition, which was itself broadcast in parts as a fearure on LE. The name of the show (then mostly referred to as The Rowan and Sarah Show - hardly catchy!) was discussed over various pub meals, and many ideas were dismissed before Limited Edition was settled on. And so the show was ready to begin production in the Autumn term.

Whilst some episodes were better prepared than others, good organisation was generally a strength of the show. The mood was intended to be spontaneous, and there was never a script, however the flow of the show, arrangement of features and so on were carefully constructed and ordered. In earlier episodes, the presenters had a flip-chart telling them the order of the show, though NaffoCue was later used for this purpose. (Still only displaying feature outlines though, not a script).

Being a heavily feature-led and VT-led show, the production work involved in LE was substantial. Rowan and Sarah produced the first 2 shows themselves, with help from Sarah Leese. However it became apparent that the workload wasn't really sustainable, and so a search was begun for an assistant producer. Mark Friend responded to the call, and came along to episode 3 before becoming involved in producing episode 4.

The crewing of the show always remained open, and other contributors helped with the production, including Iain Cooke, who edited the YSTV's Outtakes feature for episodes 5-7. However the core team working closely together is generally regarded as a strength of the show's organisation and production values. It ought to be mentioned that Rowan, Sarah and Mark were all involved in other areas of YSTV, avoiding the sometimes-unpopular habit of closed teams not contributing to other areas of station life.

Limited Edition was rare in its use of a continuous on-screen logo (or DOG). The 'LE' is ever present in the lower left corner, and this was made possible by using PACT - in fact the ability to do this was built into PACT at Rowan's request, specially for Limited Edition. Some features used stings to break up the show and re-inforce the branding, while most VTs included a 'buffer' at the start and end. This is a short Limited Edition logo animation, which (a) reiterates the branding again and (b) provides some dead space to allow mixing into/out of VTs without cutting off content. With episode 8 (Summer Term week 3), LE became the first show to use the new on-set monitor, utilising it for cheesy transitions into and out of VTs.

Limited Edition was mainly a feature led show with diverse features - some regular, some one-off - making up the majority of the content.

One of the main centerpieces of the show is the challenges feature, in which a challenge is set by one presenter for the other to complete. Usually the challenged must complete the task ready for the next show and either perform it live on the show, produce a VT or both. Challenges set were:

Star in a Remote Control Car 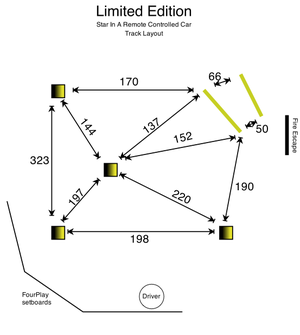 One of the central features of the show, and a direct rip-off of Top Gear's Star In A Reasonably Priced Car, this feature sees the Odd Socs guest each week being asked to record a lap time driving the show's remote controlled car. The track was constructed once a term with the guests each recording a lap, and their time being revealed when they appeared on the show. (This meant guests for the whole term had to be lined up well in advance so that their laps could be filmed). Both Rowan and Sarah also recorded times, and a benchmark was set by tame racing driver 'The Twig' - a certain YSTV member dressed in full karting gear. Rowan's time was significantly better than Sarah's! An extra second was added to the contestant's time for each bollard knocked over. The Christmas episode also saw a certain YSTV Production Director dressed up as Santa having a go.

The lap times are: (times are listed in seconds, including any penalties, with the number of penalties in brackets)

Ben Griffiths, the fasted time other than the Twig, was awarded the destroyed car (see below) as a prize.

Going hand-in-hand with 'Star', this feature involved interviews with representatives from some of campus' more unusual societies. It has a sting which features Rowan and Sarah's very own socks. The guests were:

Taking cues from the magnificent Small Screen, Rowan and Sarah reviewed output from student TV stations around the country. Programmes featured were:

This feature came about from a very bad production process - first think of a name, then worry about content! A series of occasional and fairly disparate food-related features. It made its debut in episode 3.

Originally a quick time-filler for episode 1, but actually an enjoyable and popular reguar feature, Rowan and Sarah took the paper review concept and applied it to random trashy magazines.

2 competitions were held on Limited Edition. At the end of the Autumn term, viewers could win items including a book, scratch cards, a magic tree and a scarf, in return for sending in their New Year's resolutions. Winners included Sarah Leese and Iain Cooke's brother. Keith from Ayelsbury entered.

Through the Summer term, viewers were invited to send in pictures of limited edition products. This was inspired by Jonathan Bufton's sighting of Domestos giving away a free limited edition apron - he was disappointed to hear that the apron was not actually branded with the Limited Edition logo. The winner was Sarah Leese, for her picture of a limited edition Miffy plate and bowl set. Both Sarah and Jonathan got a Limited Edition box set for winning. Keith from Ayelsbury entered again.

Stuck In The Mud

Instead of a normal challenge on episode 1, Rowan and Sarah set themselves a challenge to get 10 people on campus playing Stuck In The Mud. A great time was had by all, although the people in Goodricke who Sarah literally begged to come join in never did.

Review of the Year

On the Christmas episode, Rowan and Sarah took a bunch of people, companies and objects and commented on whether they'd had a god year or a bad one. This feature used some nice graphics knocked up in a hurry on Rowan's MacBook (making switching between these and PACT running on Graphics PC tricky).

A quick and easy VT when they were short on time, Sarah and Rowan's finger painting was actually rather fun. They very simply filmed themselves finger painting each other in YSTV's studio. Sarah's picture of Rowan is notable for the fact that Rowan's clothes are see-through, while both participants signed their creations, complete with their age, in the style of a primary school art class.

Using footage from Michael Prior-Jones's video blog, a feature edited by Mark in two parts showed life in the Antarctic. The feature included a tour of the British Antarctic Survey base, and some spectacular timelapse footage of cloud formations over 24 hours on the Antarctic continent.

Word On The Street

For Episode 8, Rowan and Sarah headed out about campus to record some vox pops, speaking to random students about topics such as who should run the country (Jon Snow, Jordan, Bob Geldof, a midget...), how to teach kids to be happy, what should be banned in public (displays of affection, chavs...) and what's best about summer (drinking in the day).

Another childish make-and-do, Rowan and Sarah built dolls houses for Madge, the pound shop doll with Madonna-esque pointy boobies. Rowan's 2-storey house was well protected, with weather proofing all round and an insulated roof, and had design features including a patio, pictures on the walls, and an integrated disco. (Made of the bottoms from flashing LED shot glasses, given away free at freshers fair). Sarah's house was smaller and had a roof which fell off at the slightest touch, however she won the design vote based on her girly pink wallpaper. Sarah's house also won the earthquake test, with the height of Rowan's house being problematic. Rowan's exterior was better rain protected, but the lack of any overhang on the roof meant too much water got inside, leading to a draw with Sarah's dry inside but dangerously soggy cardboard walls. Wind proved no problem to either house (or at least simulated wind made from Sarah's rubbish fan didn't), leading to an overall win for Sarah.

After a year of trusty use as the remote controlled car in Star in a Remote Controlled Car, Rowan thought it would be fun to try and destroy the car, in another Top Gear rip-off. (They tried to destroy a Toyota Hilux, in case you were wondering). The car survived rain, mud, being driven down steps, being driven off Central Hall, being thrown out of a window, driving through fire, having a PC dropped on it, being set on fire, and finally being run over with a real car! (Belonging to Matt Fullerton). In the end, it was bent and battered, with the right wheels not working at all and the left ones going forwards only, but it did still drive...round in circles. It was presented to Ben Griffiths as a trophy for being the fastest Star.

For the last episode, Matthew edited a VT of highlights from the last year, set to 2 pieces of music: It's Hard To Believe from High School Musical, and Don't Leave by Faithless. This VT was originally going to be edited by Rowan, who chose the Faithless track as a heart-wrenching closer designed to make the audience nostalgic and possibly even make Sarah a little upset. However Matthew suggested that it would be good if he edited the VT and neither Rowan nor Sarah saw it before the show. This proved to backfire thoroughly on Rowan, who ended up a little tearful after seeing the VT, and thoroughly embarrassed himself on air. At least the Faithless did it's job!

In 2007, Limited Edition was entered as YSTV's Light Entertainment entry for the NaSTA awards, with Sarah being our Best On-Screen Female and Rowan being the Best On-Screen Male. Sadly, none of them won, however the judges comments were favourable. They said:

Light Entertainment: The studio material was quite interesting and varied. However, the shots of the Long Boat trip seemed a bit irrelevant and it was hard to understand what was going on here. - obviously Summer Expedition didn't go down too well!

Best On-Screen Female: Nice smile and good personality. Better at doing individual pieces to camera than interviewing as she tends to speak fast then which makes her harder to understand. She needs to remember to talk to the camera / audience at home more rather than her co-presenters.