Please Sir, There's Been a Murder 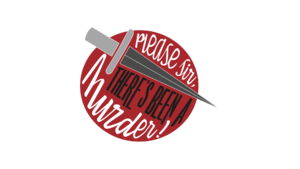 Inception of the idea

Editors note I'm not entirely sure about the exact point in time that the idea was thought of, nor how it exactly progressed. This is, as far as i can remember, correct. To how i remember the planning and execution of the event. (Andrew Waddle)

Somewhere around late January / early February 2019 Thomas Schubert and Stephanie Shires had an idea, a daft idea. Some would even say, a tremendously mad idea inspired by the viewing of The Sound of Music Live. That idea would become Please Sir There's Been a Murder.

The concept was simple; an approximately 30 minute short film, all shot totally live. The idea was thought a good challenge, but was put on hiatus for further planning while the mountainous tasks of Elections 2019, Roses 2019 and TFTV second year films were planned and executed. The next known mention of the idea was around may 2019, just post AGM / YSTV elections, where the idea was floated again by new Station Directors Thomas Schubert and Stephanie Shires, with the idea that members interested in writing the short could pitch ideas. Most present thought it a great idea, while also being totally mad. Edwin Barnes remarked at the time, "Oh for fucks sake". While this process was ongoing, the technical team (newly elected Technical Director Andrew Waddle and Computing Directors Adam Birtles) put their heads in their hands and tried to figure out how to make the shoot work.

Several weeks later, or it could have been less nobody is quite sure, the pitch session was done during the weekly production meeting. Three people pitched. Tom Maynard. Jacob Boyle. And Steph on behalf of Steph, Tom, Olivia and Andrew. With all three ideas using unique themes, eventually the winner was decided and Jacob would write it, but with a catch- it was to have on the fly viewer interaction.

The idea progressed mainly behind closed doors in the wonderfully creative mind of Jacob for the next few months. A draft was completed by September 2019 when the idea was again put on hiatus for the sake of shooting Jacob's short film B.U.M.F.A.C.E which took place directly before Freshers 2019. The project was again revived some time during October 2019, with the locked script to be written imminently and production work to begin alongside. The catch. Only 7 weeks until the agreed upon filming day, December the 11th 2019.

During a visit to V bar in mid October 2019, Steph, Jacob, Tom and Andrew attempted to plan out how YSTV could pull off such an idea in 2 months. The V bar plan, several pints later, came down to 3 factors; finding a place to shoot in, finishing the final locked script, and working out how to cover an entire house with only a handful of cameras.

Initially, with Jacob working on the script the next most practical area to work on, was the location. With a house setting needed for the entire shoot, and a whole week being required between, rehearsal, setup, shooting and pack down; the hunt was on to find somewhere suitable. Several people pitched in ideas for a house setting including Steph's parents' house and several student homes around York. After several weeks of negotiation and work by Steph, her student house was agreed upon to use as the location. With now only 5 weeks left until the live day, the technical and operational planning hurdles began to make their presence felt.

The first issue that appeared, was that the house selected is fairly small inside with compact rooms and common space. As per the script, 6 spaces were needing (5 internal and 1 ext) which was every usable room in the house and the garage / front lawn. Covering all 6 spaces with multiple cameras simultaneously was impossible with the equipment that we had and the script called for the actors to be moving around from room to room without being seen, all without any stoppage and full live. Oh and there were multiple possible paths and endings for both the cast and the crew to memorise.

The show plan was as follows;

On the technical side, the process in each room was to have a number of 'jacking in' points where the camera operators would connect and disconnect their cameras from the gallery as needed for the current live room. This meant a total of 14 individual feeds entering the gallery, plus another 2 from the graphics system within the gallery. Because of the ATEM used on the show (ATEM production studio 4K) only having 10 inputs, some feed management was required. Of those 10 inputs, 2 were blocked off for the graphics feed. The 14 incoming feeds were passed through YSTV's Micro-videohub, (gen-locked to the ATEM) which allows for a 14 x 14 matrix of inputs / outputs to be managed. Thus allowing the gallery to change between the 14 inputs and feed only the current live camera feeds and those for the next scene. (Editors note: The corresponding excel document took a solid 4 or 5 hours for Steph, Tom and Andrew to make during the course of a very long evening). With 11 routing changes to be made on the fly, live during the show, another layer of complexity was added to the process.

The running of the video cables around the house actually cause a rather unforeseen (and for the 2 electronic engineers present; embarrassing) problem; the rigging of cables around the perimeter, and especially above the gate of the back garden, effectively formed a Faraday cage around the house. This didn't exactly help with the gipping comms.

As for sound, each location had a setup of roomtone microphones for the sake of general pickup and filling of sound, with all the actors being miced with wireless lav sets borrowed from Pick Me Up Theatre in York. The sound cables around the house and the receivers from the wireless packs were all terminated under the stairs at an X32 operating as a stagebox, then the output of that box went to the gallery sound desk for final mixing and transmission.

As for the rest of the rigging and lighting, it was mainly made up during the production week by Andrew Waddle and Emma Sahall after seeing the rehearsals.

With all the planning now in place, the technical decisions made and the cast learning their lines, soon the end of term was upon us and with it: the shooting week.

We got access to the house on the 7th of December for the first technical recce in the space with the actors doing the scenes. This also acted as the first on blocking and walk through of the space for the actors. We had run practice run through sessions in the TFTV Large Rehearsal Room ahead of this week, but never on location. With these rehearsals, a lot of the final decisions and changes made to the points and procedures above were made.

The same was done on the following 2 days, with incrementally more and more runs done by cast, and several runs with the camera operators and cast allowing for the full 'dance' to be practised without any tech in the way.

What follows is a transcription of an audio recording taken shortly after the stream wrapped.