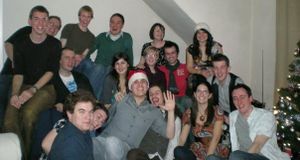 YSTV London is the informal umbrella name used by a group of YSTV alumni (or Old Farts) who graduated in the mid-late 2000s living in the capital city and surrounding areas.

The first official YSTV London "event" was a Christmas 2006 social to (appropriately enough) the London branch of Reflex. Since then there has been a Christmas party every year, with some other occasions too. These events have also been attended by Old Farts from other parts of the country. Gatherings have included: