Red Braces was a bit of an oddball - a programme about finance for students.

Michael Prior-Jones was the presenter and producer. It was produced live on a Friday evening at around 8pm. Chris Thornton did some of the research. 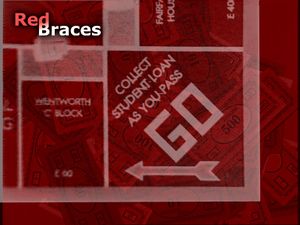 The whole programme had a "Monopoly" theme - in the title sequence, several people were seen playing a York-themed version of Monopoly in a smoke-filled room. The setboards were painted with a Monopoly-board motif (much creative use of masking tape and painting layers of different coloured paint) and the projection TV and its "window" setboard were used again to give a display for Michael to use. The Election Night 2000 silver-topped trestle table also featured in one corner of the set.

Matt Hammond created the title sequence and graphics, including making the customised Monopoly board, which still hangs in YSTV to this day (and has been borrowed by campus papers more than once for photo shoots). A lot of creative camerawork was done to get high angle "crane shots" which were actually done with a Manfrotto tripod with all three legs held together, fully extended and then leaned over the shoulder of a tall person to give the crane effect.

At the end of the titles Michael was seen to walk along the top of the programme logo and lean on one of the letters - this was done by shooting him from a camera in the Techie Room against a black background at the other end of the studio. A pile of boxes covered in black drape was used as a proxy for the letter. The whole thing was composited together on the erstwhile Macintosh edit suite. The title music was "The Beat Goes On" by The All-Seeing I.

The finished piece went on to win Best Title Sequence at NaSTA 2001.

The show itself was in two parts - Michael talking with some PowerPoint graphics on the projection TV about some aspect of student finance (banking, insurance, savings, etc) and then a move over to a "table" set, with which we gave the world market prices and also discussed the performance of the York-Traders.com virtual share management league with Sam Rickett and Erica surname?Unverified or incomplete information who ran it.