The 2017 NaSTA North Conference was hosted by YSTV on Saturday 17th June, and was organised by Grace Downer. 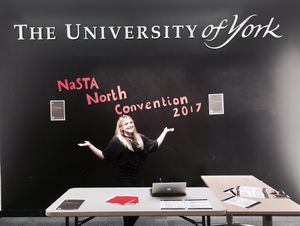 Grace Downer at the reception in the Exhibition Centre giving out wristbands for Courtyard discounts for attendees, from the Nasta twitter

Jonny McGuigan, LSTV alum and BBC Yorkshire Digital Producer, spoke about social media and online presence of student TV stations, followed by two of YSTV's own, Sam Nicholson and Emma Bew. Sam spoke about his work at BBC R&D on virtual reality and 360º video (and brought demos, including a Microsoft Hololens!) and Emma discussed the BBC Academy, where she currently worked, and gave tips for getting into the industry. Finally, Ed Braman of the University's was in conversation with Joel Mitchell where they discussed his route into TV, broadcast journalism in war zones and the nature of broadcasting going forward.