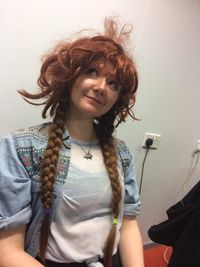 Hayley with a wig

Hayley Louise Clark is a theatre student that joined YSTV in her second year, after previously appearing in Last Page. After joining YSTV, she took over as Social Secretary from Charlotte Rogers, focussing a lot on well-being, mental health and inclusivity during her time in the position.

In her first term at uni, Hayley appeared as Ivy in the short film Last Page by Sam Hance. She stayed interested in student TV but only ended up joining for real at the beginning of her second year. Throughout the year, she was mostly active as presenter, actress and producer.

Due to being a fair bit older than most YSTV members and her caring nature, Hayley is known for being the YSTV Mum - which was reflected in her FLOPPY she won 2019. Because of other course committments during the 2019 elections, she was unable to return to her position as SocialSec. Despite that, she continues to be heavily involved in many productions and supportive of all YSTV members.

With German Tom during The FetSocDoc

Her most notable productions include: