For more on the period between closure and reopening, see Interregnum.

In 1993 YSTV was evicted from the studio it had held in Physics for around twenty yearsUnverified or incomplete information. To mark what could have been the end of the society a short programme called "Closure" was made.

The programme had two parts. The first was presented in the studio from presenters Karen Bagley (Station Director at the time) and David Bartlett (the previous year's Station Director), who apologised for interrupting the programming and went on to explain why YSTV's programme and simulcasts would shortly disappear from campus monitors. They acknowledged that there had been problems, and specifically referred to financial problems, but that they had always tried their best to bring the best service to campus. They ended by asking students to sign the petition to save the station. Over 25% of the campus signed the petition. 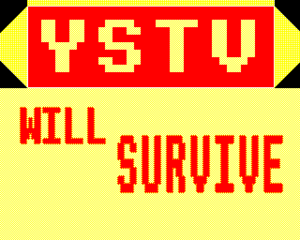 The second part was a compilation of highlights from the station's archive, then comprising around ten years, put together by Mark Hansgate. This was set to "Don't Give Up" by Peter Gabriel and Kate Bush. Many of the clips featured are not thought to be currently held by YSTV in any other form so the programme is quite a valuable representation of YSTV in the 1980s and early 1990s. The programme ended with a shot of the "YSTV crew" taken from 1993's Open Day programme, a reminder YSTV would close down on 19 June 1993, and another appeal to sign the petition. It's actually quite moving, and can be seen in Small Screen's Autumn 2004 week 6 programme, when it was re-screened to mark ten years since the Goodricke studio was opened.

A "sequel" to Closure called Re-openingUnverified or incomplete information was made in summer 1994 when YSTV moved into the new Goodricke studio. It was again created by Mark Hansgate and began with a shot of a television in a dark room playing Karen's appeal at the start of Closure, slowly zooming in. After this was some footage of the new studio and clips from new programmes, set to "Mysterious Ways" by U2.