Bulletin first ran on YSTV around the turn of the 1990s, and won an award at NaSTA.

The name was revived in 1997 when YSTV's News and Current Affairs output was revamped by News Editor Julie Knox. Bulletin would run three times a week on Mondays, Wednesdays and Fridays, and live up to its name - a quick round-up of the news, sport and weather with occasional short VTs. This regularity in the early days proved a good way of getting new members involved.

However, in 1999-00 Andrew Carter the then News Editor decided to try and run a "proper" news service and put the programme on every night of the week, with even a lunchtime "update" attempted at one point.

The news content was nearly always rehashed from the BBC and Yorkshire Evening Press websites, with two presenters sitting at a plain black news-desk with a red curtain on the front against a black background. The programme suffered from a lack of VT inserts because there was rarely enough time to produce them given the five-nights-a-week schedule. Andrew's somewhat abrasive style tended to result in most of our journalists getting fed up and leaving!

Often an anonymous caller would request that BBC Teletext news was shown just before Bulletin (a feature of BBC Schedula), allowing viewers to read the stories for themselves.

The show had a number of title sequences - the first by Chris Parker depicted a crew on location filming an item, before returning to the control room and putting the tape in a UMatic machine. Due to the frequency of use, the master tape of this was practically unbroadcastable by 1999 and a new title sequence by Chris Ward featuring flying "Bulletin" lettering over shots of campus and the control room was introduced. This was followed in 2002 by another, this time entirely graphical, using the same piece of music. This title sequence was re-vamped in October 2002 to include shots around the university in the background

Weather from the Goodricke lift

One notable highlight was the weather slot, normally a computer generated graphic voiced over by the newsreader. However, as time permitted, a number of roving news reports were produced by Chris Ward - even making it as far afield as Bridlington.

By 2001 the show was three times a week again, and in 2002 this was reduced to just twice a week - Monday and Thursday - after the Friday edition was poorly crewed.

By 2003 the show was suffering from a lack of enthusiasim from both production and crew sides, partly no-one seemed to know what role the show was supposed to perform anymore (national or local, bang up to date or more reflective) and partly because it was very time consuming to edit anything topical to the twice-weekly schedule using the facilities available. Editions would often be cancelled with short notice due to lack of crew or production staff meaning it didn't amount to much of a service. 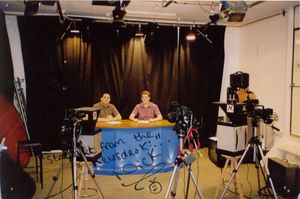 As a result of this in May 2003 the decision was taken after much discussion to bring the show to an end and replace it with the longer, more local and less frequent YSTV Week. This earned new Production Director Jonathan Bufton the nickname "Buffy the Bulletin Slayer". The final edition was broadcast on 22nd May 2003 and ended with thanks being given to the production teams and crew of the previous six years. A clip of the final episode can be seen in Small Screen's Summer 2005 Week 6 programme.

Bulletin was featured twice on proper telly - a documentary about the making of the show was shown on BBC Choice Scotland's student TV night in January 2000, and an early edition of the show featured on Tyne Tees TV's North East Tonight to mark YSTV's 30th anniversary in November 1997.