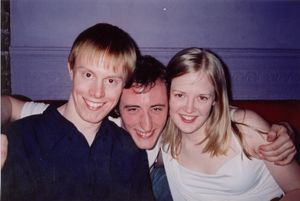 Big Gay Sunday was a regular YSTV social, mainly during the academic year 2004-5.

It began as a joke, when after sampling all the other club nights in York over the Autumn term YSTV members visited Toffs nightclub's Sunday gay night in November 2004, as it was about the only one left to go to. Despite the name it was perhaps the least gay "gay night" in the world due to York's not exactly cosmopolitan make-up. Although not a student night, it was quite cheap in order to get the punters in on a Sunday night. 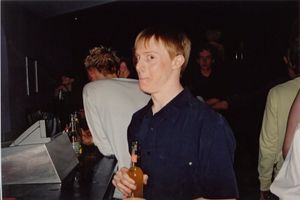 A typical Toffs (which as of summer 2008 is known as Tru) Sunday would be compered by a Lily Savage-esque MC, who made it onto the YSTV quotes board with "no I will not play the f***ing YMCA". The music was usually identical with each visit, featuring copious amounts of Hanson, Britney and the inevitable B*Witched megamix - not just C'est La Vie and Rollercoaster, but Jessie Hold On too! The second Big Gay Sunday even saw the start of two YSTV relationships. (Albeit straight ones!)

The social was referenced in Good Morning Campus as an example of what YSTV had got up to in the previous year, but as the station entered 2005-6 the social all but died out. This was partly because of the graduation of a number of members but it also coincided with Toffs deciding they didn't want to be associated with something like a gay night, and denying that they had ever held one. Soon after however, Toffs realised that if they didn't market Sunday as a gay night, no-one would go, so it re-became a gay night after all. 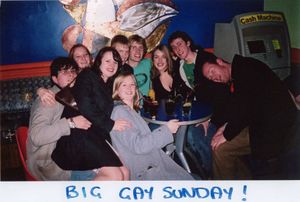 The whole crowd at the very first BGS in 2004

A revival of the social took place on 1st July 2007, coinciding with the station's 40th anniversary celebrations the night before. A number of YSTV members past and present went to The Nag's Head followed by Toffs (also the first ever smoke-free night at the club). The event was subtitled "The Reunion" but later got given the name "The Final F***", because it was almost certainly the last ever Big Gay Sunday to feature much of the original group. Those there at the first and last BGS were Sarah Selby, Kate Rushworth, Rowan de Pomerai, Dave Baker and Jonathan Bufton, with Jen Ayerst not quite making it next door to Toffs due to work committments the next day. As the club is now known as "Tru" it could be said that it would be impossible to have another genuine Big Gay Sunday...

Photos of the [first] and [second] Big Gay Sundays are on the YSTV website.