Difference between revisions of "Bona Dicta"

The programme was first broadcast in the autumn of 1997, produced by Debbie Rule and presented by Julie Knox. It followed on from 1996's very similar The Panel. The format remained unchanged for most of the run - four campus hacks or politicians, sitting round a table talking about union politics. The programme was designed to be screened just before Tuesday's fortnightly Union General Meeting, and would discuss the agenda. The set was very basic - the table was a circular bit of wood balanced on stools and black drapes were placed around the back of the studio as a backdrop.

The first title sequence was by Graham Quince, in which a broken compass reassembled, animated on the Commodore Amiga (it was a complete rip off of the titles of a cool legal drama at the time called Murder One).

Towards the end of 1998, an attempt was made to give the show a bit more production. A title sequence consisting of UGM footage and talking heads was made by Chris Ward accompanied by a new version of the old Week by Week theme music digitally recreated by Paul Soulsby. This title sequence was used for nearly five years, which may be the longest time a title sequence has been used so regularly on YSTV. The closing credits included footage from that evening's show - making use of the new Mac edit suite that had recently been acquired.

The new-look show went on to win two awards at the 1999 NaSTA conference in Glasgow for News & Current Affairs and Title Sequence (See the Press Clippings). The wins were featured in the Yorkshire Evening Press shortly afterwards including an interview with Julie Knox.

Julie continued to present the show until James Brookes took over throughout much of 1999-2000, after which the presenters were never consistent, changing very frequently. Due to the political nature of the programme it was probably the most watched on the station - usually by other campus hacks eager to see their friends. When the programme went online in October 2004 it was one of the most-watched on the website, with each edition attracting hundreds of hits. Despite this Bona Dicta was often (perhaps unfairly) derided for being stale, or dull, or unexciting to crew. However it did get some notable guests - a 2002 edition featured the new Vice-Chancellor Brian Cantor in debate with the then SU President, URY Station Manager and editor of Vision. 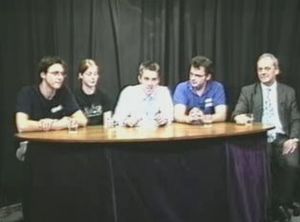 In Summer 2003 the show adopted the new news and current affairs standard set, along with a new title sequence in November of that year. The latter was produced by Steve Walker, and featured the new Bona Dicta logo flying around Central Hall. There was also a new theme tune, a more down-beat version of the YSTV Week theme tune. The new producer and presenter was Michael Brothwell, now a presenter on BBC Radio York. After Michael decided to stay behind-the-scenes there were a number of guest presenters such as James Flinders, Michelle Donelan and URY's James Wickham. Around March 2004 James Gallagher became the regular presenter of the programme, which had by now doubled in length to one hour and begun debating national politics as well as campus politics. There was also an effort to include VTs, such as the previous fortnight's UGM highlights.

From October 2004 Matthew Platts took charge for a year, adding many surreal elements familiar to viewers of Solipsism. For the final year of the programme Kev Larkin presented and produced, and the format also changed for the first time, mimicking the BBC's This Week. There was also another new look, featuring images from around York and London. However by this point UGM voting had been taken online, with the remaining "discussion" meetings poorly attended and political apathy in the university increasing. As a result of this - and of course the lack of a producer willing to take on the show - the programme ended regular production in March 2006. 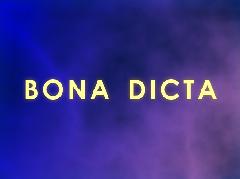 It returned for Elections 2007 in two successful debate programmes, meaning it must be one of the few programmes on YSTV to notch up ten year on air (other than coverage of events such as Elections, Roses etc). It is not yet known whether the show has a future as an annual spin-off from the elections coverage or if it will not return.

James Gallagher has acknowledged that URY's Sourcenight programme - which he launched in 2003, and continues to this day - is a complete ripoff of Bona Dicta.