Such a complete Rip-off they didn't bother to change the name, although there wasn't a (real) helicopter involved. Nigel Dallard was camera operator, with Andrea Gilbert carrying the VCR and microphone, which must have been a fun sight running round York chasing a guy (Gary Cockerill) dressed as Anneka Rice (!).

The programme was recorded in two halves, with the run-around in the city recorded on 11 May 1985 and the studio shots were then scripted and recorded on 22 May 1985. 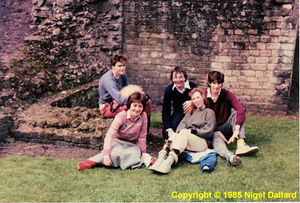 The team after running around the city 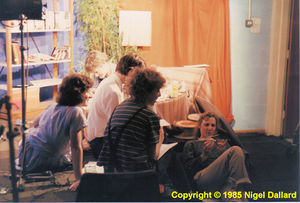 The studio team learning their lines or, in Andrea's case, playing with the toy helicopter!
Retrieved from ‘https://wiki.ystv.co.uk/index.php?title=Treasure_Hunt&oldid=3178’
Category: