This sounds too much like Good Morning Campus which went out every day for one week at the end of the summer term in 1995. One of the producers was Sophie Dennis other may have been Sarah Davies (or she may have jointly initiated idea with Sophie - I remember Andy Robinson may have been co as well because he got the provost of goodricke or langwith ( he was his supervisor) (he was good catch - maybe first appearance of York academic staff in a true presenting role - accept he was ment to have someone with him when he did the paper review.). Danette did present and so did Chris Barker. I have more too add on the show (inc photo), but did not want to screw up the current Good Morning Campus page.

By the way, Danette should have a copy of Miss dRAG as I remember doing a copy for her.

Dannette wasn't all that clear - her email claimed it was "The Morning Show" which ran for 1 week immediately before graduation time (spring 1995). Which isn't all that helpful - I'll ask. Meanwhile there is a Good Morning Campus (1995) page for stuff to go on - there's quite a good still of the title sequence end still on one of the tapes I've dubbed recently, which I will find next time I'm in York. Richardash1981 22:09, 20 May 2007 (BST).

Yeah, that would be right. It must have been June 1995. I remember working with Sophie alot. I also remember that Sarah Davies was one of the directors (as was Adam Baxter). Owen, did you direct too?

Great to hear from you Danette. I think Sophie was the main driver of the show, and now you mention it I may well have directed one of the shows. It was good fun to work on, I particular remember that you were given porridge to eat (there was some feature on eating breakfasts from around the world) and after you had tasted it you claimed you had been given oat meal. Miss dRAG was so much fun to work on - are you in touch with Lutfi? Hang on to those tapes! --Otd 00:19, 22 May 2007 (BST)

Hey, Owain! Sorry about that spelling mistake in your name before!! Anyway, nope, haven't heard from Lutfi in ages. Wonder where he is hiding out! I live in Japan and YSTV found me!?!?!

Yep, I do remember that porridge/oatmeal incident b/c Adam was the director that day and laughing his butt off in my ear when I said, "Hey, this tastes like oatmeal." Awe, the memories.

There was also an exercise feature on the show b/c I remember Chris imitating one of the moves when we came back live from the VTR. There was a weather segment, but I cannot remember who presented it exactly ... maybe Luke.

Is this the exercise feature with the girl in a black and white striped leotard, and a very pink border round the shot that is seen in the review of the year? I'll try and find a screen grab or two. Richardash1981 13:04, 22 May 2007 (BST)

I have no idea whether this is the right place to put this, but what the hell.

Good Morning Campus, Week 9 of term, June 1995... ah, I remember it well. However, I had nothing to do with the production, and I'm not sure if Sophie or Andy did either. I kept diaries throughout Uni so could probably check if anyone really wants me to and/or I can be bothered :-)

I did direct one episode. Other directors were Adam Baxter, Mark Hansgate, Owain as mentioned above (we were all coming to the end of our third year in 1995, although for a couple of us that didn't mean we were leaving!). Graham Quince was responsible for the weather (complete with much arm-waving and dodgy cut-out map of the UK), Elise Ashcroft was the lady in the leotard, Luke Brown did a fine job with the International Breakfasts, and there were also regular horoscope, TV review and newspaper review features. As well as Goodricke Provost, the then-new Vice-Chancellor, Ron Cooke, made a guest appearance one day, as did the incoming SU President (Jago Parker, I think).

The opening credits were done to Queen's "Breakthru", and involved Graham getting out of bed...

Somewhere, I have an old VHS tape that I made when I finally left in 1996. It includes the episode that I directed, and also a Review of the 1994-5 Year set to music, created by me and Adam that week to keep our minds off impending degree results. The final part of the Review is clips from Good Morning Campus, set to the theme from The Muppet Show and including Danette's infamous "it's OATMEAL!" quote. There might be other stuff on the tape as well - can bring it in June if I can find it.

Hello Sarah, You should send it in to Richard Ash as he is doing a very good job at rebuilding the YSTV tape archive from various sources. I believe that he is trying to compile something for the YSTV 40. The stuff on VHS memory tapes seems to be surviving very well as it is rarely played even though it have got cooked and frozen in the loft several times. The stuff on Umat has either been wiped (with inquorate UGMs) or played so much the tape has worn out. --Otd 18:28, 23 May 2007 (BST)

To go back to who initiated it/produced it. Try running Jo Hyde through the memory bank. I remember when the idea was pitched in the control room, her face is fitting better. I have a vague recollection that you were mentioned. Jo was back on the scene during Election Night 95 as mystic meg (national lottery had just started up).

Sarah, you soooo rock! :) That's right ... it was Graham who did the weather - now I can see him in my mind's eye very clearly. And I do remember interviewing Ron Cooke b/c the director for that day (think it might have been Jo) put us so close for the camera shot that our knees were almost touching! Mr. Cooke looked slightly uncomfortable as I moved closer and closer to him. Ha!

As for the main driver of the show, I think it WAS Jo. That sounds right.

Yep, been thinking about it more today, and it was Jo. (So obvious, really - Good Morning Campus was June 1995, and Sophie didn't arrive until Oct 95!)

Have located the tape... not sure whether I want it broadcast again or not! ;-)

This picture has caused me a lot of confusion, I do not have a date for it. At first I thought it related to Good Morning Campus (mainly due to Graham's weather map in the corner) , but the members are wrong, since 1995 intake are there. I think it must be from 1995-96 and I know the names, but I cannot work why the picture was taken. A couple of people have copies of this, since it also appears in YSTV's photo archive section. Any clues? --Owain 22:24, 24 May 2007 (BST)

I remember presenting one of the weather bulletins (not sure what happened to the much more charismatic Graham that day) and also carrying the wood to build the flat with the weather map on it across York from the builder's yard. The "International Breakfast" consisted of a selection of my friends munching various delicacies while recounting their madcap travels to different parts of the world. --Luke 31 May 2007 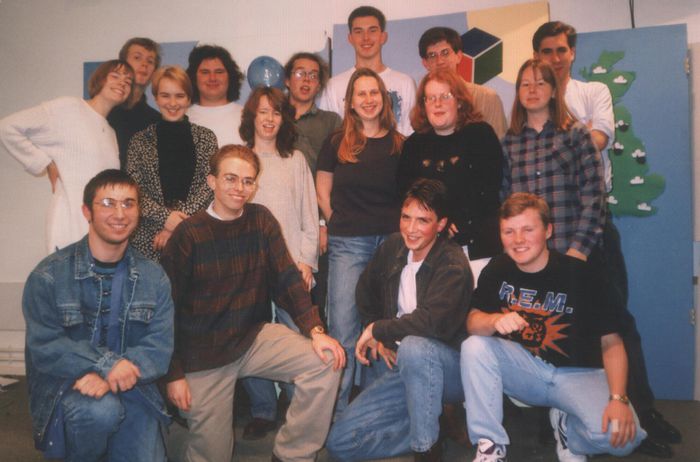