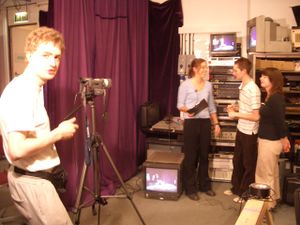 This was part of YSTV's programme of events for new members in 2004, which had an intensive series of activities in the week following Freshers' Fair (Saturday Week 1).

Stereotypes originated from an idea on the YSTV Messageboard by Kate Rushworth in April 2004. The premise of the show was to ask a group of boys and a group of girls the same set of questions (e.g. opinions on life, drinking, celebrities etc.) and analyse the difference in their responses as well as their interaction with each other.

The original programme was mooted as being called 'He Says, She Says'. However, as with many programme ideas on the messageboard, it never materialised until it was suggested in September 2004 that it could be a suitable programme to complete over Fresher's Week, as no prior knowledge of anything was required to take part in the show.

It was decided that Stereotypes should be set over the weekend of Freshers' Week. Saturday was spent set building and planning (the sets were created to look like teenage girls' and boys' bedrooms, with most of the girls' bedroom Smash Hits posters being donated by Jonathan Bufton's sister!) and the programme was filmed "as live" in two sessions (boys and girls) on the Sunday.

The "girlie" set was constructed within the "shell" of the YSTV Week set (with careful camera angles avoiding any of the light boxes peeping through) and the boys' set within the ex-Central Hall purple curtains that made up the LipSync set. Round the back of these curtains was a self-consciously studio-looking area where Kate and Pete introduced the show and analysed the participants' behaviour.

The programme also featured a Psychology student to analyse the girls' and boys' behaviour. An initial idea to provide alcoholic drinks to loosen everyone up was dropped - partly due to concerns about allowing it in the station, and partly because a number of the crew and participants had unexpectantly gone to a party the night before and were suffering from stinking hangovers! It was also Sarah Leese's first appearance on YSTV.

Editing didn't get underway until much later (January!) due to a lack of space for 4 hours of video on the station's Edit PC. The final programme (re-cut to eliminate the copyrighted title music) can be seen [on YTSV's website].

Amazingly a show of very similar content appeared on BBC Two not long after called He Says, She Says - the working title of Stereotypes! 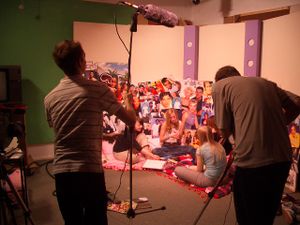 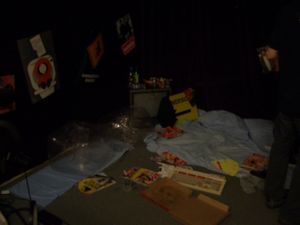