Newsround was the first programme ever transmitted by YSTV, on 21st November 1967. It pre-dated the BBC programme of the same name by around five years. It continued as a regular lunchtime news broadcast shown on the then 5 college monitors. 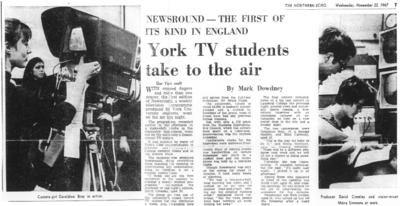 One of the first programmes was featured in this Northern Echo article on the opening of YSTV.

The producer was station founder David Crossley, the news was read by Mick Jordan with an interview by Keith Carr. The society at that time included Michael Carmody, Geraldine Bray (cameras), Moira Simmons (vision mixer). The University's senior technical officer Bruce Pears, though not a member of the society because he was not a student, was crucial to the successful establishment and production of Newsround. The title music was initially from the first movement of Dvorak's New World Symphony (chosen by Michael Carmody), and later .'Time is Tight' by Booker G. & the MGs.

David Crossley had initially gathered together a group of about 10 people, mainly through a society stall at the beginning of the first term in October 1967 (an early manifestation of the event now known as Freshers' Fair). The group met every Monday evening in the little meeting room overlooking the Langwith dining room (Now the Langwith upper JCR?Unverified or incomplete information). At these meetings ideas were discussed for the weekly 'news magazine' TV programme called 'Newsround', scripts were written and generally everybody had fun. Script writing was made easier because a couple of the members could type - not a common skill among university students in the late 1960s. One member actually owned a portable typewriter which was used extensively. This was Sieta Rijkelijkhuizen who later became Station Director.

'Newsround' was produced on Tuesday afternoons in the 'studio' in the basement of the Chemistry building. There were two cameras on wheeled tripods and a very primitive vision switching device which may have been 'home-made' by the three University technicians led by Bruce Pears who were responsible for the operation and maintenance of the video equipment. Camera operation and vision switching (such as it was) was done mainly by students and sometimes by the University technicians.

The first two or three 'Newsrounds' were pre-recorded. David Crossley remembers watching the first one in the Langwith common room surrounded by the production team and a couple (only) of curious students. 'Newsround' soon moved to live programmes which made the whole production process much more exciting.