Imbroglio to the future

Imbroglio to the Future: Part IV 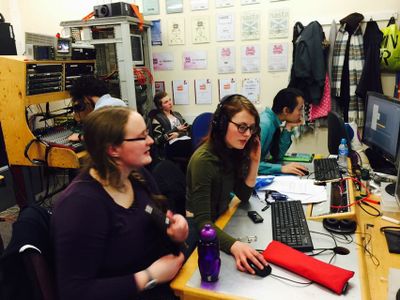 Grace, Sam, Iona, Kenric and right at the back Rachel S getting ready for the Show

Overall the Christmas show went quite well. We managed to make enough VT’s and have live content to have quite a full hour of show, and there were no major disasters during the live show.The mix of Back to the Future and Christmas was sufficiently geeky for the imbroglio.

As far as VT’s go, the drama worked quite well. It was not to clearly linked to Christmas, the only one being the presence of a mince pie, but it combined other aspects of the show well, namely York and Back to the Future. It might have been nice, if we had been organised with more time, to have some nicer shots and settings, for example the studio setting for some of the shots was not the prettiest. That said, we did manage enough some quite nice shots, such as multiple Amy’s. The vox pop on things related to Christmas and Back to the Future could have had its questions better organised, as it did end up a little rambling and long, but worked for the show. The John Lewis advert went down well, and managed to be a little topical.

Graphics looked quite good. I am quite proud of our Back to the Future esq. work. It took us a little while making the graphics involved a lot of experimenting in order to bully Flash into doing what we wanted it to, but we got there.

The live show went fine, we managed to drag guests out of the woodwork last minute, thankfully. As always, quite short staffed, but we just about managed. Some things didn’t get considered until a little late, like lighting design (just used the normal studio show lighting) and set. Set is definitely something that we probably should have had more than a cursory plan on; Adam’s last minute Christmas tree excursion possible, but not ideal. Games during the show mostly went well. The song game was surprisingly effective and led to some nice singing along. The story telling game could have done with being more visual and have more prompts to help guests, maybe props during the game could have added a visual aspect. Keeping count of scores, especially during the question round, was somewhat disorganised. Clearer game rules for points, and some sort of signifier system (have a bauble for points scored or something?) might have been useful. Or it might have just been an unnecessary faff.

To conclude, nothing caught on fire and we made a decent live show to celebrate the end of term. The biggest overall change would be, as always, be more organised further in advance. Our sincerest apologies for the lack of a JD drinking Santa, we swear he was passed out behind the sofa. 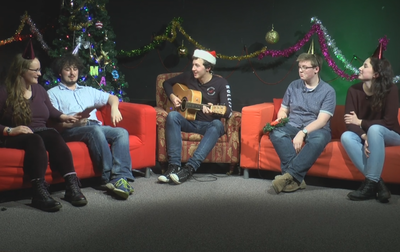