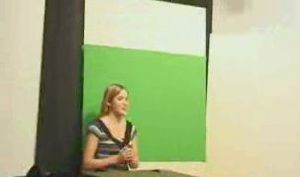 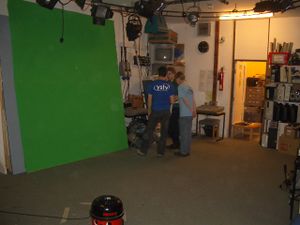 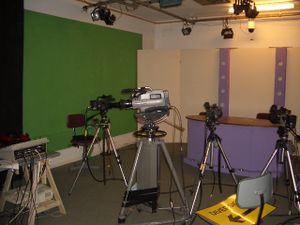 The second chroma key area, painted on a wall of the studio

It was a square of green cloth mounted on a set board from May to December 2003, and it proved quite fiddly to line up the weather graphics (or whatever else was being keyed) on the green box. Anyone who then moved the camera was in trouble!

The left wall was later painted green for the purpose (with a green cloth over the patch bay). This was used from January 2004 to July 2006, and provided a much bigger (and more importantly full screen) area, although lighting that area was tricky and the keying was often far from perfect. However it served its purpose well and was better than anything we'd had previously.

In early 2006 some proper green screen fabric was purchased, an over the summer a frame was built and a decent, moveable green screen area created. This was brought into use from October 2006.