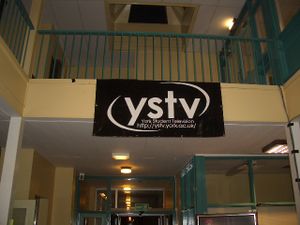 The 2005 YSTV banner at election night

YSTV's first giant logo banner was purchased by Sarah Leese in 2005 for use at outside broadcasts such as YUSU Election Nights and live coverage such as Woodstock. It featured the Idiot Logo.

URY have had a similar (although actually even bigger) banner for many years, and in summer 2003 the possibility of buying a YSTV version was brought to a station meeting. It was turned down because it was thought that our logo would normally be on a big screen of some sort and the money could be better spent. Two years later however opinion had shifted and the banner made its debut at Woodstock 2005.

Sadly the 2005 banner was left on the balcony after Woodstock 2011, and has never been seen since.

The 2005 YSTV banner at Woodstock

A replacement was purchased in 2014 by David Heaton a week after he proposed it in his speech to be Commercial Director, being used at that year's Elections. It's 3 x 1m in size. 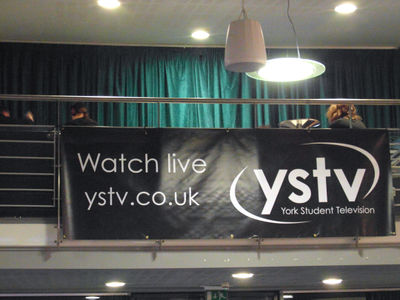