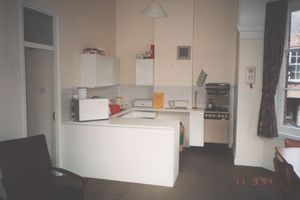 Mark Hansgate, Adrian Jones and Owain Davies were resident here during 1994-95. None of them were Methodists but they were all members of YSTV. The flat was part of the PRS stock, and they all ended up here when their respective colleges would not let them back in for their third year (not enough room apparently).

The flat had an excellent central location being on St Saviours Gate. It served as a base of operations for 3-to-1 and one of the sets for Cooking with Chris.