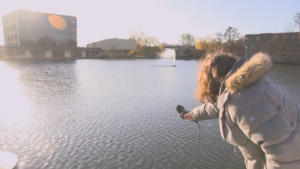 One day, on the bus to town, Jacob found his idea notebook and thought it might be a bit of a laugh to read through some of them. Caroline Preynat-Viero found the idea: Lock ness mockumentary but just filming a lake for interviews somewhat amusing, so over summer, Jacob decided to write the dang thing.

The script was simple, designed as an introduction to single camera for the new batch of freshers, as he had planned as Head of Scripted. Caroline worked as exec producer, leading a batch of eager first years to create the really amazing and very funny film.