From YSTV History Wiki
(Redirected from User:Olivia.gibbs)
Jump to navigation Jump to search

Olivia joined YSTV in Autumn 2017. Initially, Olivia was a quiet, shy fresher – a fact that would shock people who know her now. She is one of the TFTV bunch and enjoys being the third wheel to the Dynamic Duo. She became the Secretary at the 2018 elections and theProduction Director at the 2019 elections. She is famed for being the face of YSTV, when interviewed by Sky News about the impending coronavirus, in February 2020. 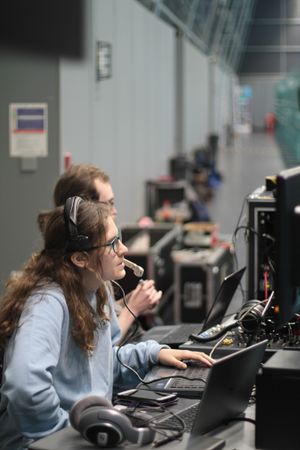 After accidentally going to an admin meeting, she realised she wanted to be more involved on a committee. She then ran for Secretary in the 2018 elections and won (to her surprise!) but then again no-one else ran so competition wasn't tight. She then got more involved by attending Roses 2018 in Lancaster and meeting other stations.

YSTV has given her an amazing group of friends to make productions with and to spend time going on trips out such as YSTV goes camping. She was also the Training and Development Officer for Roses 2019 and produced and directed a lot more productions in her second year. She is most proud of her time producing YSTV Reports and getting involved with YSTV Trips.

She was elected Production Director in the 2019 Elections and has overseen all the wonderful productions in the year from 2019 - 2020. Under her reign such productions were produced like Please Sir There's Been a Murder, Hunted: Episode 2, Quarantine Weekly, Lost, and many more. Her production slides were commonly written in comic sans with stock images and the occasional homemade memes that no-one ever appreciated enough. Whilst bored in a seminar Olivia bought a megaphone and regularly used it in meetings to command attention.

She is proud to have kept YSTV going despite the coronavirus lockdown, helping to keep ideas flowing and running extra meetings during the Easter break. Covid-19 marked the end of her time at YSTV, but the spirit of YSTV lives on whatever life throws at it.