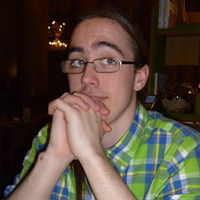 Robert joined YSTV in his second year, at Freshers Fair 2012, after being prodded into it by Liz Pascoe. He quickly followed this up by running for Deputy Technical Director a couple of weeks later - again, after being prodded into it by Liz. He seemed to make quite an impact within this role, receiving The 'I Don't Know What the Fuck You Do, But It's Fucking Awesome' Award at the 2013 FLOPPYs and being elected Technical Director on the promise to add a crossbow to the technical enforcing armoury.

Robert's year as Technical Director didn't start off quite as well as his previous year went, as he managed to trip the permanent electric supply to the studio, help discover and report a chemical spill, and admitted to YUSU that nobody knew how strong the lighting rig actually was - all in the week leading up to freshers. Since then, Robert has learnt the value of plug-mounted RCD's, and YUSU worked with us on getting a more acceptable COSHH solution in place. The lighting rig was a whole different type of fun. He must have done something to make up for all this during the rest of the year, as he was re-elected to Technical Director in 2014 on the basis that he hadn't broken everything in the station yet.

Robert used to spend his spare time studying Physics - and was occasionally refused access to the station when his degree had deadlines approaching. However, by his third year he actually ended up doing more degree work in the station than out of it. This was unfortunately of little use, as he ended up failing to progress (by way of failing several exams) to his fourth and final year. This meant that he was unable to complete his elected year as Technical Director, and stood down on 9th September 2014. Although the University kindly agreed to award him a Bachelor's degree for his hard work up until that point at YSTV towards his degree.

After graduating, Robert spend a short time working for the University's Audio Visual department, before joining Mike Chislett at the IMG Studios engineering department for a time. He now works in the Post Production department of Red Bee Media Ericsson Broadcast and Media Services "Red Bee Media (a part of Ericsson)".

Other notable things that he has been involved with