Difference between revisions of "YSTV Studio"

The room occupied by YSTV has changed throughout the years. Everything on this page I've copied and pasted from the separate articles on the studio, because I thought they would make more sense in one place. Formatting errors may be abound and I'll take some time to make them fit together better.

YSTV began life in the chemistry department. There doesn't seem to be much info about this on the wiki so far. I'll have to do some digging.

This was YSTV's second home after the initial broadcasts from the Chemistry department. Located in the single story Physics laboratory area, this was first set up as a Rediffusion studioUnverified or incomplete information, and connected to LTC directly by the University's CCTV system. It also acted as a switch point for cables coming in from all over the Physics department, intended to allow experiments to be broadcast live around campus.

At an unknown point in the late 1970s or early 1980sUnverified or incomplete information YSTV's studio moved to P/X/002 in the Physics concourse underneath the teaching tower block. The move did not leave YSTV completely absent from P/S/016 however, as video and audio going to and from LTC still passed through the equipment racks located there. This continued to be the case after YSTV's move to G/046, and so a minor panic ensued when the room was re-used by the physics department as a computational physics laboratory in 1995??Unverified or incomplete information and the racks removed. YSTV's cables were moved into a vertical cabinet at the side of the room, where they ran unattended until 1999 when the network failed as the last drop of electrolyte evapourated from a 1960's capacitor and the power supply failed. A dash to the Physics stores for a replacement 25p component got the network running within hours.

Entombed in an unmarked cupboard they continued to operate until the next round of refurbishment in 2005, when the mains supply was lost. After a panic and much hunting (no-one had written down where the equipment was), they were found, rewired and replaced to keep YSTV broadcasting to campus.

Today (summer 2007), P/S/016 is used as a nuclear physics laboratory, and is very hard to gain access to due to hazardous stuff, and needing to time it with the lab operators. There is a plan in motion to make a hole in the wall above and to the right of the door (looking at it from the outside) to pull cables through to a box/rack mounted on the wall in the corridoor.

P/X/002 was the home of YSTV from some pointUnverified or incomplete information in the 1970s until June 1993. The room still exists and has since been renamed P/X/003. 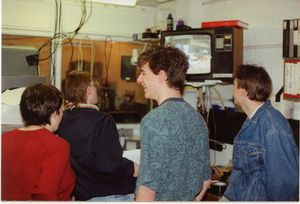 It is located within the entrance area of P/X/001, and it now used as storage space. There is little if any evidence that YSTV was ever there from the current appearance of the room. The network broadcast and return feed cables still run through the loft space above the room, and it is used a distribution point to feed signal to TVs located on the Concourse area for Conferences and Freshers week.

When in operation as YSTV's colour studio (October 1986 onwards), the area was split into three rooms in a row. When entering the Station, the first room was used as a workshop and equipment store. This had a doorway which led to the Control Room, which then had another doorway through to the studio.

Prior to 1986, the first room acted as office, workshop and Control Room, and the studio space included what later became the Control Room.

For more information see Press Clippings from the period and the Closure programme.

The most dramatic upheaval in YSTV's history occurred in June 1993 when the society was forced to vacate its studios and broadcast base in the Physics Department (P/X/002) in order to make way for the expansion of the department and construction of the Exhibition Centre. The centre would need somewhere to store tables and chairs when conferences were in place, and it was decided YSTV's studio would be used for this purpose. YSTV ceased broadcasting (and making programmes) on 19th June 1993.

At first, the University administration were not inclined to offer any alternative space at all to the society, although there was a suggestion of a move to the York St. John's campus on the other side of the city. After raising a petition on campus, support from the Student's Union and an intervention by Tom Gutteridge, Richard Whitely and Greg Dyke, the society was offered first 600 square feet of space in Wentworth, and then the current 900 square foot studio in Goodricke G/046.

This was not to be available until Spring 1994 however, leaving the society led by Karen Bagley to operate without a base for the intervening period. Whilst major broadcasts like Election Night 1994 and Children In Need 1993 were put out from temporary facilities, regular programme making came almost to a halt with equipment stored in the Physics plant room (S/010), the top of Central Hall, student rooms, and a garage round the back of Wentworth, with Karen Bagley's first floor room in Vanbrugh X block (now Grimston House) acting as temporary office space. However, in an attempt to keep members interested, the society did try to keep Campus Today going on a regular basis, and also made a move towards non-live output such as the Fresher's Guide to Campus (or The Search For Wentworth). 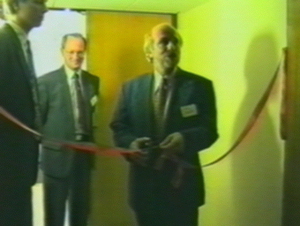 The new studio finally came into use in the summer of 1994, with the official opening by Greg Dyke on 29 October 1994, allowing regular programming to commence after a gap of nearly twelve months.