Difference between revisions of "Strong and Stable Livestream"

Strong and Stable was the name given to YSTV's overnight coverage of GE2017 with The Lemon Press. It was envisioned as an alternative and comedic take on the elections. As Katherine Bell pointed out: "If people want serious, they'll watch the BBC". The multiple livestreams streamed on both YSTV and Facebook live in 3 increments at 10-12pm, 1-3am and finally a more serious political debate show from 4-6am. It was named after the popular 2017 meme about Theresa May's 'Strong and Stable' leadership and the joke that YSTV streams were rarely strong nor stable.

There were vague intentions to cover the elections since the current PM Theresa May unexpectedly called the election back in April 2017. However since the election was called for June 8th just after exam season, pre-production was put on the back-burner until anyone could be bothered. Turns out no one really could, so much like the election campaigning itself it was quite a last minute affair. There was a compilation video of YSTV's political content of 2017 created by Raquel Bartra to advertise the stream which was released on YSTV facebook before the show. Purposefully bad graphics were also created by Emily Friend to advertise the stream on social media. An example of the horrific colour scheme and ironic use of comic sans can be seen in the logo recorded here.

The Lemon Press (York's answer to The Private Eye) were invited onto the project to provide VTs, presenters and general anarchy. There was a very productive meeting with our lemony partners where the general outline of the show was discussed. From this meeting it was decided Tom Lee would help The Lemon Press film VTs with our green screen in the studio. Spoiler alert: Most of these ended up being unbroadcastable. One of the skits about the Queen was bordering on treason so there was some trepidation for the actual live show.

Edwin Barnes booked YourSpace for the night, intending to set up the OB hours before we went live.

The Day of Livestream

The day of the election stream was at the end of the infamous week of hell from 2-9th June where there was a production every single day. Therefore, everyone was a bit fed up and there wasn't much going on until around 6pm on the night. Since we were supposed to go live at 10pm it was decided there wasn't enough time to set up an OB in YourSpace and the studios would have to do. There was then a rush against time to build a decent-ish set with two a red sofa, an armchair, setboard, photos of politicians, a precariously hung glowing "On Air" sign with "Just About" written above as well as multiple balloons. Hui-Ling Phillips, Katherine Bell and Raquel Bartra went to Aldi to procure catering as there was a huge crew arriving. 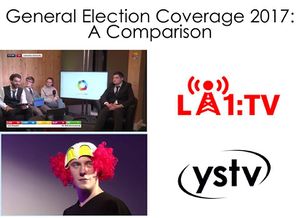 There were many running gags in the comedy shows from 10-12pm and 1-3am presented by Andy Tallon and Josh Chapman. These included:

The show from 4-6am was produced by Joel Mitchell and invited political commentators from many student political parties and publications to comment on the results and predict the nature of the hung parliament which was beginning to become inevitable. This show has a more reserved set up with 5 stools set up around a screen where two presenters and 3 guests (around 10 guests swapped throughout the two hours) discussed the night. This show utilised VT footage from YSTV's previous coverage of the election period including our coverage of the Corbyn rally and an exclusive interview with Boris Johnson. Joel Mitchell and Benjamin Whybrow held the show together by producing, presenting and researching on iPads live on air as comms were temperamental at best.

The Strong and Stable livestream was shortlisted for and won a 2017 YUMA for best entertainment to the surprise of everyone involved. Especially as YSTV had also been nominated in the same category for Behind The Streams