Difference between revisions of "Stephanie Shires" 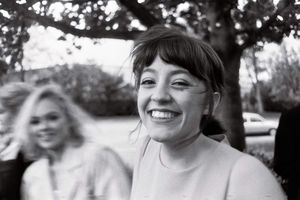 Stephanie at NasTA 2019 in Nottingham (It's in black and white, but yes, she was wearing yellow)

Stephanie (usually simply called “Steph“) joined YSTV in autumn 2017, taking over the position of OB Coordinator shortly after. She then became the Station Manager (formerly Deputy Station Director) at the 2018 elections and currently, she holds the position of Station Director along with her sidekick Thomas Schubert (the other half of the Dynamic Duo). They are the first to run YSTV jointly.

Steph has been involved in countless productions, usually as producer or camera OP, but occasionally as director, writer and editor. She is officially recognised as the nicest person to ever enter the YSTV studio, and is a true Yorkshire lass.

Stephanie enrolled at the University of York in 2017 as a student of the “Film and TV Production” course – making her one of the pioneers of the “TFTV Revolution”, in which film students gradually took over control of the station. Due to her very vocal love for programs like “Top Gear”, and her alleged appreciation for YSTV’s work before she came to uni, it did not take her long to become a fully-fledged member of the station, being elected OB coordinator in the by-election of 2017 after a heart-warming speech.

Most of Steph’s early work during her first term consisted of the weekly filming of Coffee House Sessions, the consumption of weekly Courtyard Nachos and just being generally lovely. Later that year, she made her first experience with live streams as vision mixer on the infamous Christmas Massacre, all while dressed up as a happy snowman. At the time, she assessed the massacre as probably the weirdest thing she ever did in her life – a statement that she would reconsider several times during the next years.

With the following terms, Steph got even more into her own as the heart of YSTV, while building friendships with both old and new members. Her image as the station’s sweetheart was further established through her inability to properly swear (leading to her catchphrase: “Chuff me””).

She continued to work on several key productions like Elections Results Night 2018, Unibrass 2018, Hidden and Roses 2018, before eventually being elected as Station Manager when she ran spontaneously at the 2018 AGM. In this position, she heavily focused on organizing the archives, accessibility, mental health and well-being. Due to her kind nature and openness, Steph was the first point of contact for many members to talk about their issues.

Having made valuable yet frustrating experience producing an OB unit all by herself during Roses, Steph continued taking on a more active role as producer for example for “The SU” and “The Wizard of Oz”. The later production scarred Steph for life, as its editing process took several weeks and bored both her and Thomas Schubert out of their minds. But on the bright side, through their shared pain her and Tom went on to form the self-proclaimed Dynamic Duo.

At the end of her first year, Steph spent a whole day filming “Guide to Campus” – a weird and comedic take on a campus tour hosted by Richard Jones and written and produced by Steph and Joe Wharfe.

During summer, Steph mostly stayed in York with a few other YSTV members, while working on several productions to keep up the constant stream of content YSTV put out at the time. For example, Steph produced several episodes of YSTV Reports.

Most importantly, Stephanie produced and edited her pet project: the coverage of Micklegate Run 2018 – a massive production during summer time. This meant several days of work and organising the crew; and many many months of heavy editing. During this, Steph proved her talent as director and producer once again.

At the beginning of her second year, Steph started working on her new productions such as “Dad’s Army”, “Copy and Paste” and "Please Sir, There's Been A Murda!". She was then elected jointly as Station Director along with Thomas Schubert at the 2019 Elections (despite them both being the reason behind the incredibly long 6 hour AGM the previous week when they passed The 52 Amendments to bring YSTV back up to date).

She is known for her excellent organisational skills and reliability. While staying in York over the summer of 2019, she continued working on cleaning and re-organising the studio, while also acting as the chair of Freshers' Committee 2019. Additionally, she was also elected as a Student Trustee for NASTA. 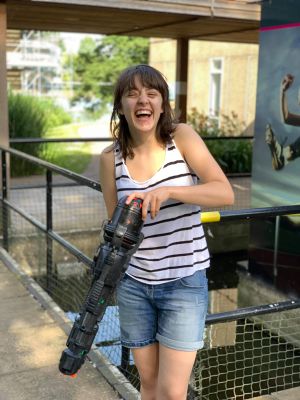 Stephanie during a watergun fight in 2019

Do you want to smell my hole?

Every time I put on my watch, it's on a different time... isn't that weird?