Difference between revisions of "Roses 2017"

Hosted by York, YSTV collaborated with LA1:TV as well as other NaSTA Stations to produce coverage on the annual university sporting competition between York and Lancaster.

Due to Roses being hosted in York, the producers were all from YSTV. Initially this was Katherine Bell as Executive Producer and Edwin Barnes as Production manager. LA1:TV gave them many large empty spreadsheets to fill in for crew amongst spreadsheets for tech allocations, timetables etc.

The crew for Roses kept growing, as connections made at NaSTA 2017 enabled us to enlist the help of crew from Forge TV, LSTV, LSUTV and NaSTA as well. The crew attending was scheduled to be around 90 people over the four days of filming. All of which apparent'y needed roles allocated, crib sheets and call sheets. Therefore voluntarily Hui-Ling Phillips was enlisted as another producer, the role came under many names, the most common being the Director of Better.

This year was incredibly successful with a maximum of 6 simultaneous live streams running.

This was possibly the most technically ambitious Roses to date, with a peak of 6 concurrent livestreams.

As part of the supporting tech used for Roses, Robert Walker brought with him two 16TB storage units, which went on to form docs:Bruce. Also brought by Rob was a video router, which formed the basis of a TX monitoring station. 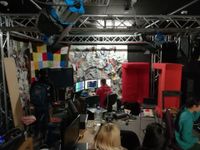 The stream was run through our stream server, then forwarded on to LA1:TVs Wowza system. The streams were broadcast on the Roses Live website, as well as being shown on a screen erected on the side of Central Hall - although the screen was pointing into the lake, rather than at the crowd at Greg's Place.