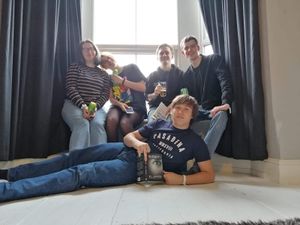 Manu in front of the rest of the FTP Crew: Caroline Preynat-Viero, Zoe Dickinson, Dan Derbyshire and Jonathan Hughes

Due to being only 17 when he joined, Manu is often considered the YSTV child (despite literally everyone around him being just as childish as he might be).

Manu famously enjoys the more meme-y aspects of YSTV's content, so it only makes sense that he created one of the biggest YSTV memes himself: Sexy Johnny Hes East.

He is also well-known for being very determined to the station's productions. Case and point: When the second episode of YSTV does First Dates was in dire need of straight guys to be put on he date, Manu volunteered. As lovely as that was, neither the date nor the episode went very well: It got never released and to the editor's best knowledge, there never was a second date.Unverified or incomplete information