A documentary series exploring the literary history of Yorkshire, "Lights on Lit" was pitched and ratified on the 28th January 2013. It aims to investigate the lives and works of our county's most iconic writers and involves filming on location, interviewing experts and examining the texts. It is produced and presented by Helen Hobin. The opening sequence was made using stop-motion photography in the University Library at 3am, and the theme song was written by Helen and performed by Marie Mills. Each episode is approximately 25 minutes long. A 10 minute edit of the second episode was entered in the NaSTA 2014 Awards, and won Highly Commended for Best Factual. 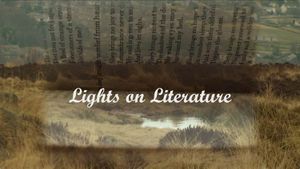 The first episode was made during the Spring Term of 2013 and released at the start of the Easter holidays. It involved a day trip to Haworth to film at the Brontë Parsonage Museum, interview Anne Sutton (the collection manager), and to gather shots from the local graveyard, church and the (freezing cold) moors. Further interviews with academic staff took place on campus over several afternoons. The main theme discussed was the influence of the siblings' juvenilia - their childhood imaginary kingdoms of Angria and Gondal - upon their later works, and the museum allowed us access to wonderful artefacts, including minuscule hand-written plays, watercolours and the pivotal wooden soldier toys. As if the reward of exploring literature itself was not enough, the tea room and the pub were also visited. 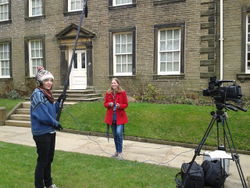 Filming the first episode in Haworth.

The second episode was filmed during the Summer Term of 2013, and edited/released at the start of the Autumn Term of the next academic year. The team travelled to Thirsk to investigate the home-town, farms and local countryside which inspired the world's most famous vet to write semi-autobiographical novels. We spoke to Rosie Wight, Herriot's daughter, interviewed visitors to the 'World of James Herriot' Museum, and got endearing shots of new-born calves being licked (by the parent cows). The main focus was on what makes a work of fiction endure and become a best-seller, particularly if from a non-academic focus. We also got to film the original recording equipment from the BBC television series 'All Creatures Great and Small', and several clips from old and new adaptations were used in the episode.

Filmed over two days just after the Three Peaks trip, this episode was pretty tight to turnaround, as the plays are only staged on wagons once every 3-4 years, on two days of the summer. We had previous footage from rehearsals filmed in April/May, and split off during the day, with two DSLR camera ops (Rob Drane and Thomas Cheyney) capturing the crowds and the various plays, and the very unlucky duo of Sam Nicholson and David Heaton having to sound and camera op respectively for what felt like more than 100 takes of each section. This resulted from Helen having only looked at the script she wrote for herself on the day. We interviewed Angie Millard, who produced Jesus's Entry into Jerusalem and Roger Lee, the chairman of the York Festival Trust. We also spoke to Laurence O'Reilly, who played Jesus in Angie's production. Footage from alternative stagings of the plays was used, and new lower thirds were created by Tom. The episode was entered for Best Factual in NaSTA 2015, and came third, with very useful and positive feedback.

Warning: Referring to the show as 'LoL' may cause the producer to flinch/lash out violently.