Produced by Courtney Brotherson while Edwin Barnes was in Amsterdam. This year marked the first time we didn't have to make 60sms for Part Time Officers as well. This greatly decreased the work load and meant we could focus on the overall quality of the videos. The video release times were also staggered over the next week, one day per Sabbatical position. This meant that more time could be spent on editing so the keying actually looks half decent. 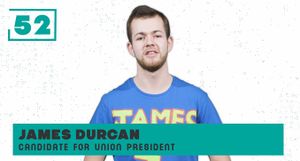 An example of a finished 60 Second Manifesto: The winner of YUSU president James Durcan

This livestream was the night before Unibrass 2018 but was surprisingly well organised nonetheless. It was advertised by YUSU and the debate society as 'The Big Debate: Elections Special'. It was produced by Edwin Barnes. Special shout out goes to Thomas Schubert who was an expert wireless camera and livened up the rather dry event by capturing many amusing and unflattering shots of YUSU staff and Matthew Ingram eating chips.

In exchange for not making 60sms for the Part Time Officers it was decided that a debate would be appropriate. YUSU decided to move this event twice within 48 hours which did wonders for both the event promotion and stress levels of producers Richard Jones and Joe Patrick. In the end it was held in the Kitchen in Alcuin for some reason? Thankfully some candidates and audience worked out where to come and showed up for the filming. There were some issues as the Kitchen has no wired internet so there was some very suspect and comically long cabling. It was also a bother to get the OB unit up to Alcuin, unsurprisingly. The event stream was a last minute great success with some impassioned debate. Paticulalry the special guests invited to the controversial Working Class Officer debate who Edwin Barnes invited to get back at YUSU for their indecision and cause some drama. 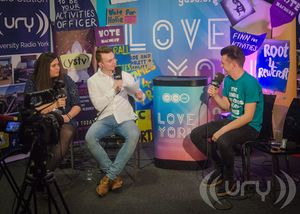 To cap off the crazy elections period the results night was suitably mad. It was a collaboration between YSTV and URY, they took our audio and provided crew and one of the studio presenters opposite our own Joel Mitchell and Grace Downer. Cal Cooke produced the main hall while Katherine Bell was in charge of the studio show. There were two cameras, a jib and one wireless camera in the main hall covering the large standing crowd and stage. The entire event was hosted by YSTV presenter Josh Gorroño Chapman. In the studio there was the Canon C100 and a DSLR covering the set, two presenters and interview guests as they were elected. The set was built from YUSU's large curved board, YSTV and URY standing banners and then all the campaign posters taped on. It looked marginally better than this sounds. During the broadcast one of the photon beards started smoking, sparked then blew.

Aftermath and After Party

As ERN's was so stressful, and there was an on site bar, many crew including producers Edwin Barnes, Katherine Bell and Joe Patrick drank multiple pints during the show. The security passes given to all YSTV and URY crew then meant that they all got into the 'Timewarp' club event in Courtyard after the results for free. There were copious amounts of alcohol and enthusiastic dancing. The official after party finished at 2am but a few unnamed YSTV members decided it would be a great idea to host another after-after-party in the studio with many members campus media and then random people who heard the music in attendance. Many ridiculous things happened and many personal items such as keys and cards were lost. The costume draw was also pillaged. Katherine Bell is still very surprised no security was ever called.