Bargain Mad was YSTV's 2013 live shopping channel show, following previous attempts in 1994 and 2001. The show featured Chris Parker and Josh Hunter attempting to sell various "bargains", with viewers encouraged to purchase them via the use of hashtags (#) on Twitter. 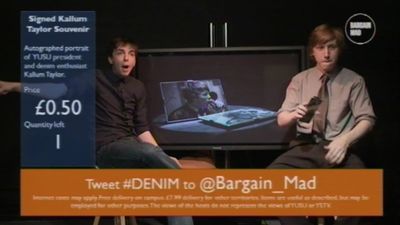 Episode one aired live at 11PM on 26th September 2013. Amazingly, Chris and Josh managed to provide 52 minutes of largely unscripted hilarity, and even managed a sale, leading to applause from the crew at the end of the show.

The first episode placed Chris and Josh on stools on either side of the plasma, which was used to display the Bargain Mad logo and VT's of the products being rotated on a table. New products were brought on to set by the Floor Manager for live demonstrations. Numerous puns were made along the theme of bargains ("bargain mad", "bargain up the wrong tree", etc.).

Chris made a number of references to members of the show's crew:

In the 2012-2013 academic year, a female first year student (who shall remain unnamed) led a campaign to stop YUSU's shop Your Shop selling The Sun newspaper, due to the misogynistic message that some students (notably the unratified FemSoc) believed was sent by the paper's page three feature. The motion was ultimately defeated 3:1 in YUSU's referendum.

In the end, FemSoc didn't get ratified and had to change its name to "University of York Feminists" as it was deemed by YUSU to offer largely the same services as the union's Women's Committee. The Sun was quietly removed from Your Shop anyway, due to no-one actually buying it.

"Lucy Walters stalking in the background"

A running joke around the period in which the show was broadcast was Lucy's supposed crush on Kallum Taylor. A week later, she would perform a musical tribute to the "Special K" to the tune of Wrecking Ball (Miley Cyrus) during the final live Freshers week show.

Despite having a relatively small live audience (broadcast in week 0, Summer Camp, before most of the new freshers arrived) the episode was well received. The chair of ComedySoc commented on Facebook: "This is incorporating my favourite thing about TV shopping channels, the desperation to keep talking no matter what." On the episode's on-demand page of the website, one anonymous viewer called the presenters "the next Mochrie and Stiles", branding the show "a triumph".

Tragically, shortly after the broadcast of the show's first episode, Chris and Josh were both killed in a freak accident involving the broken picture frame glass covering the studio floor, rendering any further episodes an impossibillity. According to Chris, anyway.