The Baby Shark Social, was an event that occurred due to a remix CD, of baby shark songs, simply existing. The party was the brain child of Joe Radford, and might not have happened if Sophie Bolwell-Davies had not spent £30 on a giant shark costume. The night for many was one to remember, or not in the case of Will Stirk, who was found passed out in an usual spot and was later heroically saved by Andrew Waddle. At the start of the evening, Morgan McKay, Rhys Milling, Sophie Bolwell-Davies and Olivia Gibbs got very experimental with some facepaint, and Olivia Gibbs made an ingredible TikTok with Sophie's help. 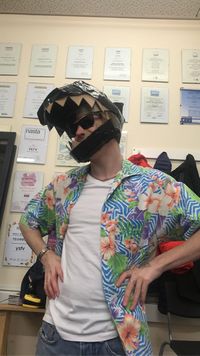 Soon everyone had arrived and the classic game of sardines was played. Alice Gow led the first game and cleverly joined a group of students playing boardgames. Stealing a pair of glasses and a hat, she disguised herself too well, and was surprisingly very hard to find within the vast Maths department. If it wasn't for the growing number of YSTV members huddled under the desk, she might never have been found if Rhys Milling hadn't have spotted her first! Another game was shortly started with Sophie Bolwell-Davies and Joe Radford hiding between the vending machines, although their hiding spot wasn't so clever with the sound of them giggling echoing around the corridor. For many from this point on wards the night is an exciting blur, by the end Rhys Milling's Birthday had been one to remember as he sung 'Islands in Stream' very loudly through the microphone, thus starting a very badly sung karaoke. For those still alive at this point, pizza was ordered as security swept the building and told Rhys he was a bit 'pitchy' amongst other incorrect statements about his incredible singing. By the end of the night only three remained, Rhys Milling, Alize Akturk and Sophie Bolwell-Davies, who walked back to east at 7 am the next morning after surviving a night that we'll all never forget!!!